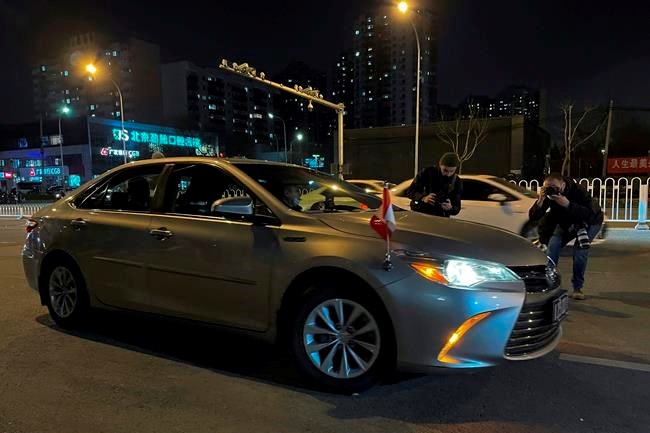 BEIJING – A second Canadian national who had been detained for more than two years on charges of espionage in apparent retaliation for Canada’s arrest of an executive at Chinese telecommunications giant Huawei was tried on Monday in Beijing.

BEIJING – A second Canadian national who had been detained for more than two years on charges of espionage in apparent retaliation for Canada’s arrest of an executive at Chinese telecommunications giant Huawei was tried on Monday in Beijing.

The trial of analyst and former diplomat Michael Kovrig in Beijing follows an initial hearing in the case of entrepreneur Michael Spavor in the northeastern city of Dandong on Friday.

Canadian diplomats were denied access to the trials and were told that hearings on alleged national security concerns would be held behind closed doors. Despite this, diplomats and journalists have appeared to seek information and show support.

Before the Intermediate Court No. 2 in Beijing, Jim Nickel, the deputy head of mission at the Canadian embassy, ​​told journalists that he had learned that the trial had started but had been banned from entry as it was in violation of China’s international and bilateral contractual obligations represent. Despite a lack of information, Nickel stayed outside the courthouse until after dark.

“Michael Kovrig has been imprisoned for more than two years. He was arbitrarily arrested and now we see that the trial itself is not transparent, “Nickel told reporters earlier in the day.” We are very concerned about this, but we thank those who have emerged from the embassies here in Beijing and the United States with international support that we have had for Michael, for Canada, and the reputation many of us have for their immediate release. “

Nickel said 26 countries had sent representatives to show their support, including the US, UK, Australia and many European nations. It was not clear how long the trial would take or when a verdict would be pronounced.

Speaking at a daily afternoon press conference, Chinese Foreign Ministry spokesman Hua Chunying said, “The Canadian side made irresponsible remarks about China’s legal treatment of the cases of Canadian citizens with diplomats from some other countries in China, which is gross interference in China’s judicial sovereignty. “

China’s handling of the cases is “unrepentant,” said Hua, while calling Canada hypocritical as it also reserves the right to investigate cases with state secrets behind closed doors.

The Chinese government has provided almost no information about the allegations against the two, but a ruling Communist Party newspaper claims it worked together to steal state secrets and send them overseas. No verdict was pronounced in Spavor’s case and it was not clear whether additional hearings would take place.

Such cases are almost always predetermined in China, however, and Beijing is using Kovrig and Spavor as leverage to secure the release of Huawei CEO Meng Wanzhou, who was arrested at the airport in Vancouver, British Columbia at the request of the US. The two Canadians were arrested in China a few days later.

Meng is wanted by the US for fraud related to the telecommunications giant’s dealings with Iran, which is under US financial sanctions.

The two Canadians have since been held while Meng was released on bail. They were indicted under China’s broadly defined national security laws in June 2020.

“Your arbitrary detention is totally unacceptable, as is the lack of transparency regarding these legal proceedings,” said Trudeau in Ottawa.

“China needs to understand that it’s not just about two Canadians. It is about respect for the rule of law and relationships with a wide variety of Western countries that are at play with the arbitrary detention and forced diplomacy they have dealt with. “

Meng’s case has deeply angered the Chinese government, which has promoted Huawei as a world leader in mobile communications technology, and sees their detention as a deliberate attempt to slander Chinese companies and hamper the country’s growing economic and political influence. Beijing has called for their immediate and unconditional release and has restricted various Canadian exports, including canola seeds, and sentenced to death another four Canadians convicted of drug smuggling.

The U.S. and Canada have pledged to work with China to secure the release of Kovrig and Spavor, but meetings between senior U.S. and Chinese diplomats last week – the first since President Joe Biden took office – seemed little hope Offer.

US Secretary of State Antony Blinken said Chinese human rights violations “threaten the rules-based order that maintains global stability,” while senior Chinese foreign affairs advisor Yang Jiechi said China “will not accept unjustified allegations from the US,” and relations do done “at a time of unprecedented difficulty”.

“Xi is extremely ambitious and compares himself … to Mao Zedong and the first emperor of China,” Tsang wrote in an email to The Associated Press.