3 homes damaged in a massive fire in northwest Calgary 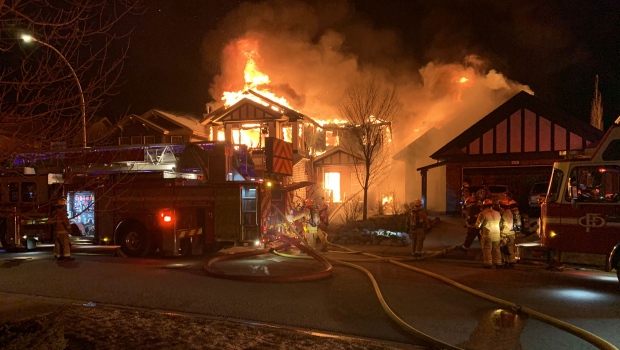 CALGARY – Fire investigators work to determine the cause of a fire that has damaged three homes in the northwestern Calgary community of Royal Oak.

The Calgary Fire Department was called to the scene on Saturday at around 1:30 a.m. on the 100 block of Royal Oak View NW.

On the way to the scene, additional emergency calls reported a fully involved structural fire, which prompted the crews to request additional fire-fighting help.

Upon arrival, the crews discovered a house venting smoke and flames from the roof, and flames were already striking a second house.

“Firefighters quickly set up streams of water to put down the flames in the exposed houses before surrounding the fire attack on the main house,” said a press release.

Air ladder carts were also brought in to put out the fire, which also spread to a third house.

Three residents of the source house and one resident of each neighboring house were able to escape safely.

The fire has since been extinguished, but due to the extent of the damage, all three houses are uninhabitable at this point.

Bahrat Bhargava, a resident of the area, says he was woken up by his neighbor early Saturday.

“We were careful because fire can jump and we were very grateful to them.”

When he went outside he said he could see a lot of smoke and fire from the first house where the fire started. A short time later, Bhargava saw the second house catch fire.

“We were worried about the next house because the fire was really bad, the roof was totally (devoured).”

District chief Dennis Raven of the Calgary Fire Department says the investigator is on site investigating the cause of the fire.

“They’ll probably be here for the rest of the day to find out. It’s going to be fenced off.”

He says newer neighborhoods in Calgary present a number of problems for them when it comes to fighting fires.

“The streets are narrower and there are cars everywhere. Our trucks are pretty big and at first it’s a struggle for the guys not to hit anything,” he said. “Once we get a truck and the hose is up, it’s difficult for other crews to get on – they have to walk around the block and that adds to their arrival time.”

As the season changes, Raven adds that there are a number of things residents need to be aware of as there is a shift towards more outdoor activities.

He adds that functional smoke alarms are an essential part any time of the year. It’s also important to have an escape plan in place and to make sure everyone in your family knows what to do in the event of a fire.

Firefighters stay on-site looking for hotspots while investigators investigate the cause of the fire.

Chahal: Hatred must not flourish in Calgary