An ID scan is required before entering some Calgary liquor stores 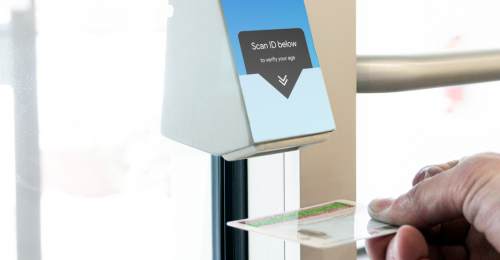 Customers at four Calgary liquor stores are required to scan their IDs before entering to reduce theft and keep employees and customers safe.

The Calgary Police Service has partnered with Alcanna, a wine, liquor and beer retailer in Alberta and British Columbia, to introduce controlled entrances to select liquor stores across the city.

To unlock the door in locations with controlled entrances, customers must scan a valid ID using PatronScan, a digital system that validates government-issued identification.

Without a valid ID, the user cannot access the store. PatronScan is also equipped to recognize incorrectly manufactured IDs.

Acceptable forms of identification are as follows:

The recent spike in violent theft and robbery of liquor stores across the province has led to the introduction of these controlled entrances, according to a press release from the Calgary Police Service.

“The main concern we have is the increasing threats to employees and customers that arise from such violent events,” said Sargent Nick Wilsher of the CPS Crime Prevention Team.

“We know that in other cities and provinces, the number of thefts and robberies has decreased dramatically after using systems like PatronScan,” he added.

Alcanna decided last year to install PatronScan in multiple locations in Edmonton. After the installation, the number of alcohol thefts decreased significantly.

The statistics provided by Alcanna show that product theft was reduced by 94% and that from January 2020 to January 2021 there were no robberies in stores with the PatronScan system installed.

This had a positive effect on the financial results of the business and on the creation of a safer environment for employees and customers.

“The Alberta Association of Chiefs of Police has required a statewide controlled entry requirement for all liquor stores,” said Tank Vander, president of Alcanna, in the press release.

“We are confident that this partnership with the Calgary Police Service to introduce controlled entrances to Calgary will bring about the same dramatic reduction in theft and robbery as our pilot program in Edmonton demonstrated,” he continued.

Customers must scan their ID to access the following Calgary liquor stores:

The PatronScan system was activated on Thursday April 29th at ACE Liquor TransCanada and ACE Liquor Crossroads. Customers at the two Liquor Depot locations will bring the system to market by mid-May.

Alcanna hopes to expand the PatronScan secure access pilot to additional locations across the city in the future and is encouraging other retailers to join this crime prevention and public safety initiative.