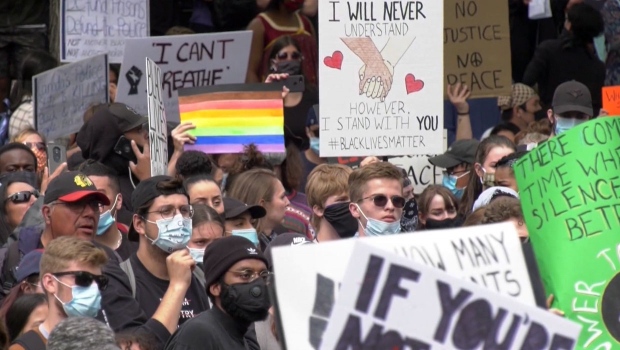 CALGARY – Anti-racism groups say the city of Calgary should be ashamed of the way it handles a public hearing on systemic discrimination.

More than 200 Calgarians are registered to speak during the hearing, which now extends for a third day. However, many are concerned that they have five minutes to explain their story.

Shuana Porter, a member of the anti-racism group United Black People Allyship (UBPA), compared the hearing to herding cattle and put every black person into a group. She says that each ethnic group must be given separate speaking time so that the city can understand each person’s unique experience of racism.

“That alone shows that intent could never have been the result of actual change. I had to sit in a room for seven hours to have five minutes to speak.”

Porter adds that UBPA plans instead to hold its own town hall meeting without anyone having to register. The group plans to give members the opportunity to ask questions and create a survey to define a list of discriminatory issues facing the black community.

“At the city hearing, they said that they normally don’t allow speakers to ask questions and that this protocol alone is against changes.

“This system that the city put in place for this hearing is the same system of racism and oppression because people get demotivated and discouraged and then they don’t speak out loud and if they don’t have a voice you don’t get the real essence of what actually happened. “

The Canadian Cultural Mosaic Foundation agrees. This group’s CEO, Iman Bukhari, launched a petition that received more than 70,000 signatures and called on the council to take action.

“But we didn’t want a hearing, we wanted advice,” said Bukhari. “The consultation involves working with the community and this is just urgent. There was no website dedicated to this hearing. Nobody knows when they are speaking and many people have had less than a day to sign up.”

Bukhari went on to say the city councils should be ashamed, adding that many city workers were not properly trained in dealing with racism in the community.

“The council doesn’t understand because their reactions and responses to racism are normal and the pain behind it needs to be focused,” she said. “These are very serious and intense stories of police harassment and real trauma, and the city doesn’t even have local mental health support.”

Ward 6 Coun. Gian-Carlo Carra, who co-chair the hearing, admits the criticism is fair, but says 95 percent of speakers were allowed to exceed the five-minute deadline and the city is more than willing to listen.

“We really encourage people to respect the time and try to solidify their thoughts and meet this time limit, but we are extremely and deeply understanding when they are unable to, as they are tackling a very difficult subject,” said Carra.

Carra added that a group of five experts are also assisting council members to help them better understand what is going on in the community.

Dr. Malinda Smith is a panelist and is also co-chair of the hearing. She recently became a Canadian citizen and was named Vice Provost for Justice, Diversity and Inclusion at the University of Calgary.

Carra says now is the time for town hall to make real change.

“We are trying to counterbalance the protests against Black Lives Matter on the street and into the government halls,” he said. “We say that this is a government that is not here to systematically oppress you, but a government by, through and for all and including you, and if it is not for you, it is not for anyone.”

The Calgary Community and Protection Committee hopes to end the hearing of all speakers on Thursday. Your next step will be the formation of a city committee on anti-racism and an action plan to create positive change in the future.