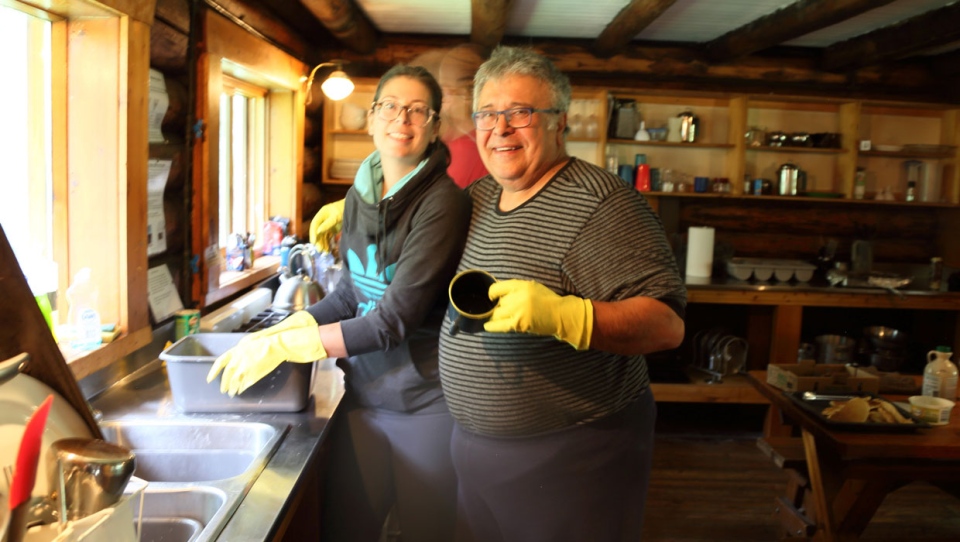 CALGARY – Adrian Bussoli’s family, whose company is helping out the pandemic by making masks, robes and other PPE, pray for his recovery after being hospitalized with a severe case of COVID-19 last week.

Michael Bussoli, Adrian’s son, said during an interview with CTV News on Thursday that the risk of his father getting COVID-19 has always been an issue for his family.

As a co-owner of Alberta Garment, 68 year old Adrian did his best to adapt to the work environment. In certain situations, however, he had to go to the office.

“It’s a workplace where people need to come together,” said Michael. “You can’t sew things through zoom calls. Yes, you can ‘outsource’ home sewing projects, but it’s not really practical for industrial purposes.”

Adrian was scheduled to receive his COVID-19 vaccine on April 14, but had to cancel it when he came into close contact with a positive case.

“After that, he began to feel increasingly crappy,” said Michael. “Wednesday April 14th, the day he was due to be vaccinated, he got a COVID test and the next morning he was barely able to speak. We had a conference call with him and convinced him to go to the hospital. “

He says when his father got to the hospital his oxygen level was measured at 56 and he was immediately taken to the intensive care unit and placed in a medically induced coma.

Michael says he was initially plugged into a ventilator that did over 100 percent of his breathing, but things have improved since then.

“In the past few days, his lungs have been producing about 50 percent of his oxygen. He’s still in a medically induced coma and looking better, but he’s not out of the woods.”

The community steps in to help GOFUNDME

Since Adrian came to Calgary, Michael has said he’s been a volunteer.

“He was a little hockey coach for a long time. He was president of the Italian club in the mid-1980s,” he said.

Michael also says he has been a mentor to the Calgary youth for decades, using his handball game skills to teach others at Eau Claire YMCA.

“He’s very central (to the sport). When he was 17 he was the Canadian junior champion. He hasn’t played for a long time and then started playing again at the Eau Claire YMCA in the early 1990s.” . “

In addition, according to Michael, Adrian has worked to improve conditions for workers in many different industries, including through his own business.

In return for all of this work in the community, Michael said the support in return, given the current situation his father is facing, has been “tremendous”.

Donations also went to a GoFundMe campaign from a range of people across Calgary.

“The community has come together so amazingly and we really appreciate the support,” said Michael. “It comes from all corners of the different churches we have worked with.”

ALBERTA GARMENT HAS MADE ITS PART IN THE PANDEMIC

According to Michael, Alberta Garment was particularly hard hit during Alberta’s economic downturn in 2015, and his father and business associates were looking for ways to “reinvent themselves” and revitalize the business.

When COVID-19 turned into a full blown pandemic in March 2020, he said it was a “natural evolution” for Alberta Garment to help with these efforts.

“They made it for the city of Calgary, the Canadian military, school boards, private companies and a number of companies across Canada,” said Michael.

The provincial government even recognized the efforts of Alberta Garment and many other local businesses in announcing the Bits and Pieces program in April 2020.

“They took it very seriously because they wanted to increase production and ramp it up,” said Michael. “In 2020 they hired people because they needed more and more production, which was like a ray of hope – an economic ray of hope.”

Meanwhile, Premier Kenney’s office has sent a message to the Bussoli family during this time of crisis.

“It is with a heavy heart that we hear of Mr. Bussoli’s battle against this terrible disease,” a spokesman wrote in an email to CTV News. “When Alberta was in the early stages of the pandemic, Mr. Bussoli stood up and looked around what he could do to help others. With a real entrepreneurship of giving, he adjusted his business to help his fellow Albertans. Ours Prayers are with him and his family at this extremely difficult time. “

The GoFundMe campaign for Adrian and Sue Bussoli raised more than $ 25,000.

Calgary cop, who lost his legs to influenza, hopes to walk again