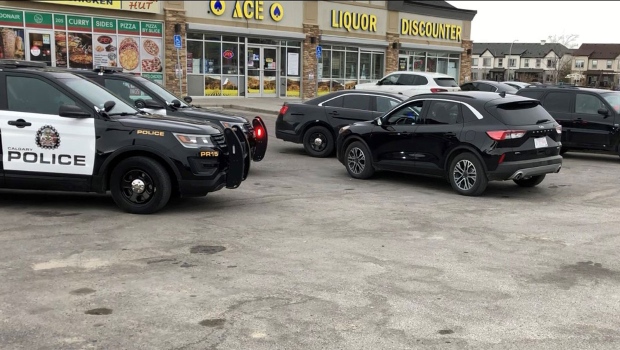 CALGARY – Wednesday morning started like any other day for Calgarian Nathan Magee, who enjoyed a cup of coffee and a stroll with a local friend near his home.

Everything seemed relatively normal until Magee noticed a woman in need in the parking lot of the New Brighton Shopping Center.

“She looked disoriented so I called 911,” he said. “Then all of a sudden this black SUV with tinted windows with two masked people drove in front of me (who started out) and asked me about the sale of gold.”

Magee immediately recognized it as a fraud but stayed in touch with the police to provide them with information. The Calgary man played along and tried on a gold ring that a woman in the SUV gave him.

“I wanted to give her the ring back and when I return the ring she grabs both of my wrists and pulls me into her van and it was just utter chaos.”

“When they pulled me in, the back window fell down and I thought, ‘I’m dead.’ I was just waiting for a gun to come down and I was scared. “

Magee escaped, but says the people in the SUV still followed him as he walked down the sidewalk.

Within a few minutes, four police cruisers showed up to arrest the people. Magee says a little girl was also in the back seat of the SUV, which made him worry about her safety.

The Calgary Police Department is now warning people of the dangers of “diversionary theft” and of fraud.

As of March 1, investigators have received reports that 10 Calgarians have been victims of fraud, often found in public facilities such as gas stations, where criminals ask for money or offer gold or jewelry for money.

According to the Alberta Law Enforcement Response Team (ALERT), 84 reports of the money for gold fraud have been reported to Alberta law enforcement agencies, with losses of just over $ 20,000 reported.

A total of 12 reports of diversionary jewelry thefts were reported across the province with losses below $ 20,000.

If it’s too good to be true, it probably is, just listen to your courage and instinct, “he said.

“The people who approach the victims look like normal people, but it is never normal to buy quality jewelry for cash from someone you don’t know.”

Wittman adds that it is common for criminals to travel in rental vehicles to hide their identities. The investigation into the incidents is ongoing and there is no word on whether any crime is related.

Some tips for Calgarians to keep themselves safe include:

Anyone with information about recent diversionary thefts are encouraged to report them immediately by calling the Calgary Police Department at 403-266-1234. When witnessing a crime, police say Calgarians should always call 911.

Elizabeth Henao, the manager of Calgary’s Smart Gold Shop, says more and more Calgarians are coming into her store to sell counterfeit items.

“You have to be vigilant with this type of situation because it just keeps getting worse,” she said.

“People think it’s real gold when they come here, but the result is it’s wrong and they are being scammed,” she says. “It happens at least once or up to three times a week.”

Henao says the pandemic is becoming more common, but their business makes sure the items are actually genuine by using magnets and specialty machines to determine their exact elements.

Consumers should never buy gold on the street, but rather from licensed jewelry stores.

Wes Lafortune of the Better Business Bureau agrees that it is up to the consumer to find out what they own or want to buy.

“The person you are selling your gold to should be very transparent and have that exact weight. There should be some kind of record and it is important that the consumer knows the price of gold so that they have some expectation.”

Lafortune adds that consumers should review items multiple times, determine if there will be any other fees, and consider insurance when dealing with refund policies should an item be lost.