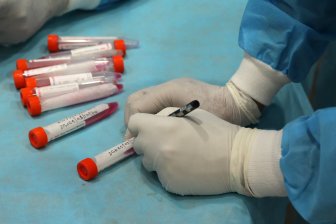 Calgary police say a teenage employee at a company in southeast Calgary was sexually assaulted while at work earlier this month and they hope the public can help identify the suspect.

According to investigators, the 17-year-old girl was on a tall shelf in the Fairview Township store on July 20 when she was approached by the man, who then sexually touched her without her consent.

Police said the man winked at the girl before leaving the store. Officers and employees tried unsuccessfully to find the suspect.

The girl was able to give police enough detail to create a composite sketch of the man described as in his early to mid 60s, about 5 to 7 inches tall, medium height, with a gray mustache and bushy gray eyebrows.

At the time of the incident, he was wearing a gray plaid Page Boy / Newsboy hat, black t-shirt with a pocket, black cargo shorts, and black Nike shoes with a red swoosh.

Anyone with information about the incident or who could help identify the suspect is asked to call the Calgary Police Service at 403-266-1234 or contact Crime Stoppers.

24 communities in Calgary will have photo radar this March