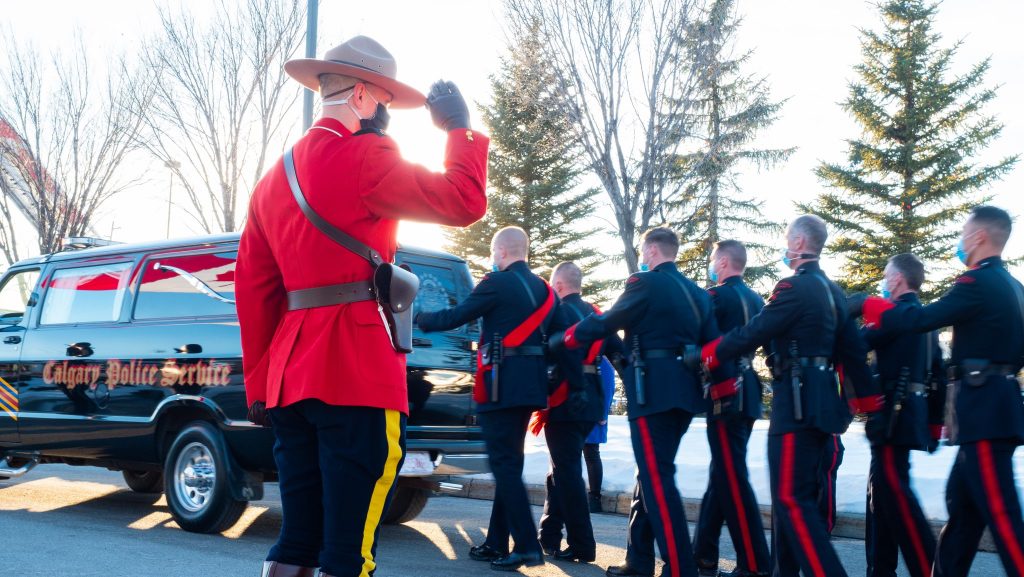 It was a solemn afternoon in Calgary when the city police said goodbye to one of their own on Saturday.

Sgt. Andrew Harnett – the officer who was killed on duty on New Year’s Eve – was buried at a private funeral for family members and fellow officers.

The Calgary Police Service was granted an exception from Alberta Health to allow 50 people to attend the funeral.

From the funeral home, a multi-car procession made its way to CPS headquarters in northeast Calgary, where they were met by hundreds of police officers, mounties, firefighters, rescue workers, and more – all to show their respect.

The arrival of Sgt. Harnett’s body was heralded with a thunderous flyby by two Royal Canadian Air Force CF-18 Hornets.

The somber procession – led by standard-bearers and a lone drummer – then took on a muffled tone. The procession went through the streets and parking lots around the police headquarters, which were lined with uniformed officers.

Design firms behind the Central Library, American stadiums, as…

This weekend could be stormy for Calgary

Some of the hundreds of officers – all with face masks – greeted the procession as they passed. Others had their hands on their hearts.

A large Canadian flag held by the heads of the fire trucks waved overhead.

Sgt. Andrew Harnett’s body was carried to its final resting place by rows of emergency personnel. I don’t think I saw anything so gloomy yet spectacular, a tribute to the person and officer who he was. #yyc @ 660NEWS @citynewscalgary pic.twitter.com/RjRGF6lssO

It was the last farewell for 37-year-old Harnett, who was hit by a vehicle on New Year’s Eve due to a traffic obstruction. Two people were charged with first degree murder in his death.

Harnett leaves his wife Chelsea, who is due to give birth to their first child this summer.

Last couple of shots as we get ready to go. RIP Sgt. Harnett. #yyc pic.twitter.com/PRtIV3v5JG

Files from The Canadian Press were used in this report

Design firms behind the Central Library, American stadiums, as partners in…

This weekend could be stormy for Calgary

Here’s what to expect from the Calgary rental market this year: Report