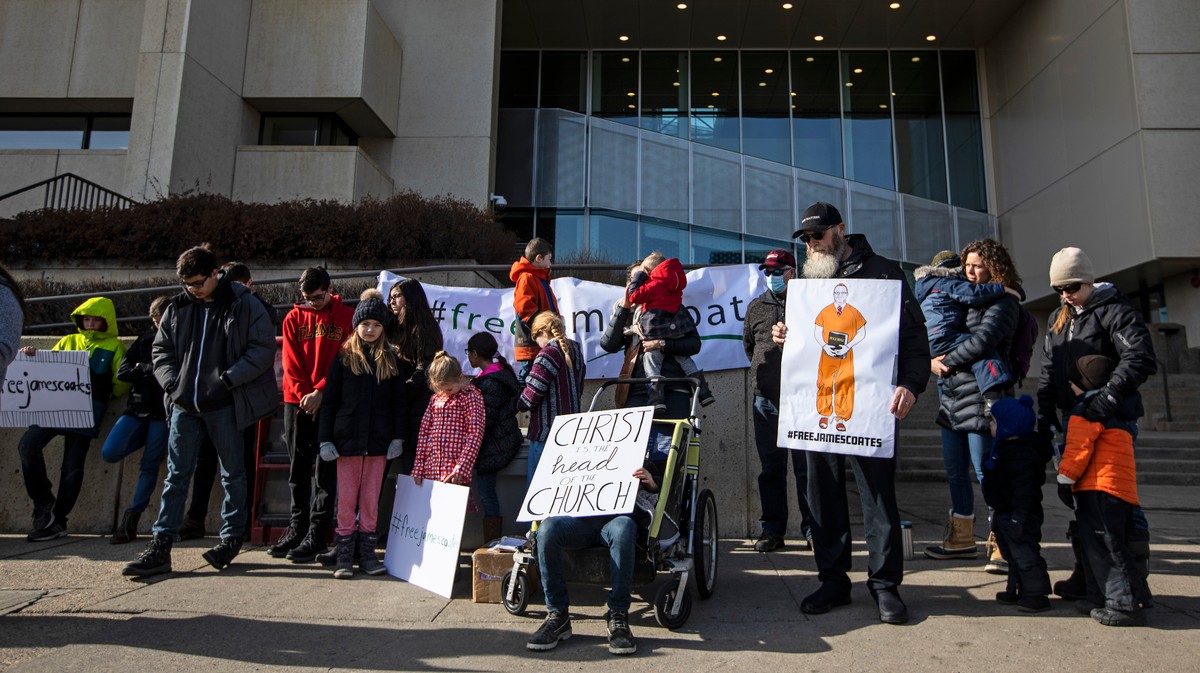 Supporters gather in court as Pastor James Coates of GraceLife Church appeals bail in court after he was arrested for violating COVID-19 rules in Edmonton, Alta on Thursday, March 4, 2021. THE CANADIAN PRESS / Jason Franson

Alberta authorities have physically closed a church that appears to have violated COVID-19 regulations.

GraceLife Church in Edmonton was one of the places of worship at the center of a holy war waged by a group of pastors against protocols that lowered the death toll from the pandemic. Early Wednesday morning, health officials and RCMP officials went to the church, blocked the streets surrounding them and put a steel fence around them.

This is the first time during the pandemic that Canadian authorities have intervened to forcibly close a place of worship. The province initially ordered the church to close on January 19, but GraceLife Church ignored it.

GraceLife Church pastor James Coates is in shame at his unwavering refusal to submit to COVID-19 security measures. Coates was held behind bars for several weeks after surrendering to authorities for violating COVID-19 protocols and refusing to agree to bail conditions that would lead to his release. The conditions were that he merely followed the rules already in place that would have allowed him to continue preaching but only allowed his church to fill up to 15 percent of capacity.

His story became a rallying cry for anti-lockdown fanatics across the country. Coates was released on March 22nd and all charges but one against him were dropped. He immediately started preaching to a full crowd again and took no precautionary measures.

Alberta is currently in the midst of what is perhaps Canada’s worst third wave of COVID-19 as cases rose 27 percent in the past week, forced them to go through another lockdown and Premier Jason Kenney urged people to stay home .

However, the Prime Minister’s requests fell on deaf ears in GraceLife Church. The church held two jam-packed Easter services this weekend with local media reporting the parking lot was jammed and a livestream video showing the congregation happily exposed and singing close together.

In a statement, Alberta Health Services said they tried to work with the church before taking such extreme measures, including trying to meet with Coates last week, but the church would not agree on a date.

“The Alberta Health Service (AHS) has physically closed GraceLife Church (GLC) and prevented access to the building until GLC can demonstrate it can comply with Alberta’s Chief Medical Officer of Health restrictions,” the statement said They have not attempted to work with AHS to reduce the risk of COVID-19 transmission. “

Coates and his followers are not just on a sacred mission. In a statement previously posted on the GraceLife Church website, the pastor greatly downplayed the severity of the pandemic and reiterated a popular conspiracy theory that the pandemic is a ploy for the elites to deprive people of their freedoms.

Coates and GraceLife Church have not yet responded to the action taken by Alberta Health Services, but Erin Coates, the pastor’s wife, posted pictures of the fence and a long response on Instagram. Like her husband, she shared the belief that it is about more than controlling the spread of the virus.

“I pray for all pastors and Christians who still think it is a virus and health order,” she wrote. “Our charter and our penal code clearly mean nothing as long as the government can develop a story good enough to ignore. God have mercy on our nation. I pray for their souls. You are clearly under your judgment. “

GraceLife Church isn’t the only Albertan church to be in the spotlight this month. A Calgary pastor known for his homophobic attitudes who recently helped organize a tiki torchlight march in Edmonton recently became the darling of the international right-wing media for kicking police officers out of his church.

Church online supporters have responded strongly to the actions taken by AHS. One wrote, “This is tyranny no matter how you cut it,” while another wrote that he believed this was “Kenney’s first shot to start a civil war”.

Coates will face trial in May on one charge of violating an order from the Chief Medical Officer of Health.

About us – Philippine Canadian Inquirer