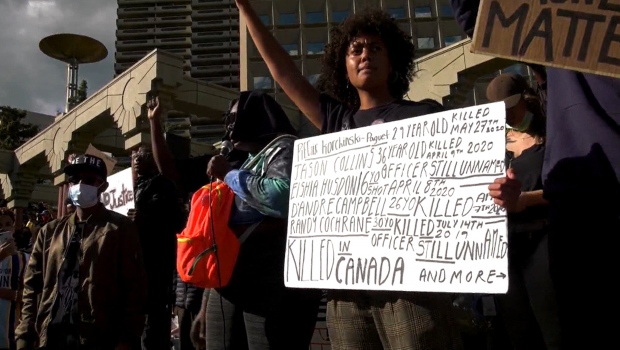 CALGARY – As community lawyers continue to call for action from the city council, Tuesday marks the first day of a two-day public hearing on systemic racism in Calgary.

The meeting comes after thousands of Calgarians marched the streets to speak out against racism and police brutality during several recent demonstrations.

The Calgary Community and Protective Services Committee reserved Tuesday and Wednesday to hear from at least 150 citizens who have signed up to speak.

Due to the limitations of the COVID-19 pandemic, each person will call remotely and have five minutes to share their experiences of injustice and trauma. They can also suggest recommendations to make the city more inclusive for everyone.

The hearing was adopted unanimously by the council three weeks ago after a petition from the Canadian Cultural Mosaic Foundation received more than 70,000 signatures. The Council has allowed speakers to submit letters and register online since 30 June.

Tuesday morning’s hearing in the council chambers will include presentations from five experts, including Malinda Smith, recently appointed Vice Provost for Justice, Diversity and Inclusion at the University of Calgary.

Smith will co-chair the meeting with Ward 9 Couns. Gian-Carlo Carra, who says now is the time for the town hall to listen and make real change.

“This is a social moment in which we can go from generally non-racist to anti-racist,” said Carra. “We now want to translate this from actions on the streets into actions within the government walls. The point is to expand this list and confirm these plans to approve the mandate for a new committee against racism.”

Each panelist will give a presentation before the 135 speakers are given their speaking time.

Meanwhile, Calgary’s anti-racism community group, We Stand YYC, organized a peaceful demonstration outside City Hall to mark the hearing. The group says they will be there to show support and solidarity for all Calgarians who share their experience with the city council.

It is not known how many people will attend the demonstration, but the organizers remind everyone to practice physical distance, bring hand sanitizer and wear a mask.

Here are 17 free things to do in Calgary this spring