It’s a promise I can’t wait to see fulfilled. In their most recent speech from the throne, Justin Trudeau’s government pledged to ensure that the web giants’ revenues are “more fairly shared with our makers and the media.”

As a journalism professor, I think this is great news for Canadian journalists. The Canadian media has struggled for the past decade – and more than 2,000 jobs have been lost since the COVID-19 pandemic began.

But how high will the contributions of digital platforms be? How can we calculate what news is worth to them?

Mark messages with a dollar value

I’ll be focusing on Facebook both because we can extract Canadian revenue from its financial documents and because there is no revenue-sharing model.

It should be noted that nearly 98 percent of that revenue comes from ad sales – it’s the same good old business model that has supported the news media for the past 200 years, but Facebook tailored it to the digital age using emotional manipulation.

CrowdTangle offers, among other things, access to the 30,000 publications that generated the most interactions in a given period of time. Interactions are the sum of shares, reactions (like love, wow, haha, anger, sadness and, more recently, worry), and comments. The tool also allows you to limit your search to pages that are managed in a specific country.

For each of the 30 months between January 1, 2018 and June 30, 2020, I used CrowdTangle to identify the 30,000 posts that generated the most interactions on sites whose administrators are mostly in Canada. I received 900,000 Facebook posts from just over 13,000 different sites. Almost 500 pages of this belong to the news media. Together they have published nearly 80,000 articles.

This means that media pages make up 8.9 percent of the Canadian content on Facebook Pages. That portion of the company’s Canadian sales has accounted for more than half a billion dollars as of 2018.

Number of publications by language and page category from January 2018 to June 2020.
(Jean-Hugues Roy), Author provided

However, we need to take into account that Facebook doesn’t just generate revenue when a post is published, but when people interact with that content by sharing, liking or commenting on it. So let’s take a look at how interactions have been distributed by language and page type since January 1, 2018.

Of more than 7.6 billion interactions, more than 400,000 were triggered by journalistic content. That is 5.3 percent of the total.

This type of computation, which weighs the location of journalistic content by the least number of interactions, means that Canadian media has allowed Facebook to raise nearly a third of a billion dollars in the past two and a half years.

Of course, my studies have their limits. Facebook generates revenue in Canada when advertisers buy ads to reach Canadians. In order to be able to measure the revenue of Facebook in Canada more precisely, it would be necessary to examine what content Canadians display on this social network. However, Facebook does not share this type of information. So the best we can do is to study what is being produced by sites administered in Canada. 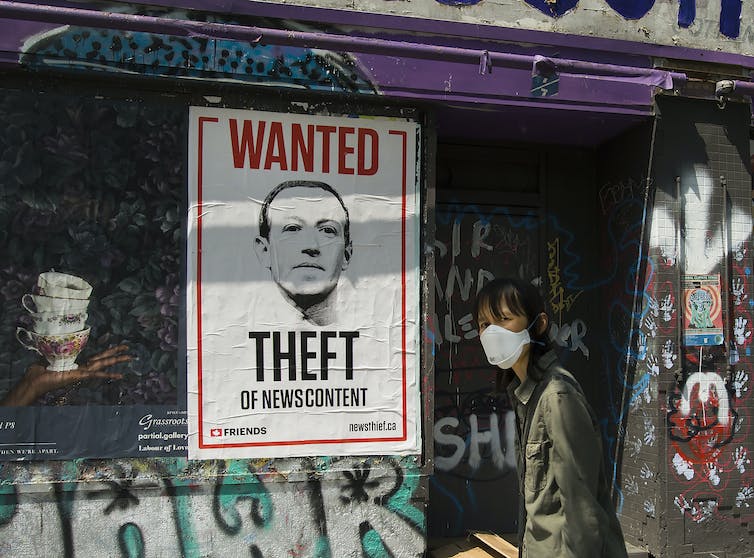 Friends of Canadian Broadcasting ran a campaign called Wanted to draw public and political attention to rules that allow Facebook to benefit from content created by Canadian news outlets without compensation.
THE CANADIAN PRESS / Nathan Denette

Plus, it’s not just pages on Facebook. There is also content on groups and profiles. And Facebook generates income through Instagram, Messenger and WhatsApp. However, it is only possible to collect country data through the pages.

The main takeaway from this analysis is that there is a gap between what the media gives Facebook as revenue and what Facebook gives back to them. Kevin Chan, director of public order at Facebook Canada, recently stated in Le Devoir that Facebook had spent $ 9 million on various journalism projects in Canada over the past three years.

There are other ways Facebook benefits the media: They can monetize their stories through “instant articles” that leave content on Facebook to share revenue with the media, or through the video sharing platforms Watch and IGTV, Facebook’s attempts, with YouTube to compete.

In the US, Facebook News, a new licensing mechanism, could allow some major media outlets to make up to $ 3 million annually.

However, instant articles have been abandoned by many media outlets, and developers trying Watch have returned to YouTube. In both cases, it’s because Facebook isn’t sharing enough of its earnings.

Australia introduced laws that would force Facebook and Google to sit down with the Australian media and negotiate over revenue sharing. Canada’s Minister of Cultural Heritage, Steven Guilbeault, appears to have been inspired by this approach.

Facebook has responded to Australia’s intentions by threatening to prevent users from sharing local and international news. Imagine Facebook with no news: would we use it just as often if we could just share clickbait with our friends?

So getting Facebook to share its earnings would be a triple win. First, with a little more money, the media could hire more journalists. I say “a little” because I know Facebook alone won’t save the media, but it would certainly help.

Second, the federal government (and all Canadians) would win too, as supporting the production of quality journalism is a concrete way to combat misinformation.

Third, Facebook would win because Canadians would be more certain that this is a source to trust for their information needs.