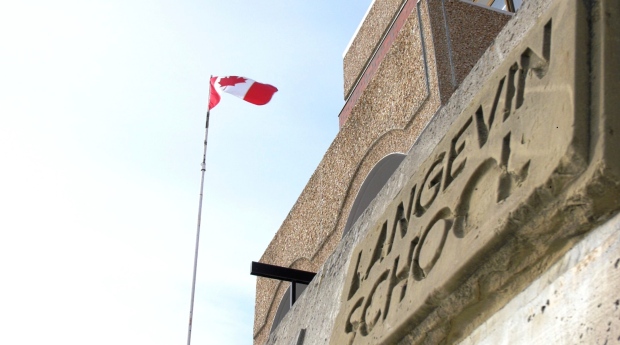 KALGARY –
The Mayor of Calgary is urging the city’s public and Catholic school authorities to immediately rename the Langevin School and the Bishop Grandin School – both named after the architects of the Canadian residential school system.

Mayor Naheed Nenshi made the statement during Monday’s regular council meeting, days after it was revealed the remains of 215 children were discovered in a former dormitory in Kamloops, BC

“I urge the Calgary Board of Education and the Calgary Catholic School Board to make a statement and do it now,” he said.

“Just say, ‘As an act of reconciliation, we are renaming these two schools, we don’t know what, we will work with the church to find the best way, but we recognize the harm and pain caused by the Bishop Grandin School is caused.

“It is a school that many members of the Tsuut’ina Nation go to and you send them to school named after someone who did that. And that’s not difficult. It is not difficult. It doesn’t take that much political courage. And I would really urge my elected counterparts in the school authorities to take this symbolic step now. “

More than 150,000 First Nations, Métis and Inuit children were forced into the boarding school system between the mid-19th and 1990s.

In Alberta alone, at least 821 children died while attending 25 schools operated across the province, but experts say that number is likely much higher.

St. Mary’s (Blood) Residential School near Cardston, Alta. – about 78 kilometers south of Lethbridge – was the last boarding school in Alberta. Opened in 1898, closed in 1988.

“The Calgary Catholic School District takes all indigenous affairs seriously and is deeply saddened by the discovery in Kamloops. As Catholics, we deeply regret the home schooling movement of the past, ”it said.

“We are committed to the educational recommendations in the report of the Truth and Reconciliation Commission: Calls to Action. When it comes to the possible renaming of a CCSD school, the Board of Trustees will consider feedback from stakeholders such as parents, staff, students, Catholic bishops and elders in our indigenous community. “

“So I’m actually the living reminder of how long it was or how short it is. Maybe there is a better way of saying it. “

Many Canadians don’t really understand what systemic racism is, Robinson said, and changing names will help some heal.

“When we honor people who started genocide, it is problematic for my generation, for the next generations entering the school system,” she said.

“Perhaps some of your relatives will drive by the school and see the name, visit a bad memory or feel bad. How can we honor someone who initiated genocide? “

With files from Kevin Green of CTV Calgary

Why Hire a Canadian Immigration Attorney?