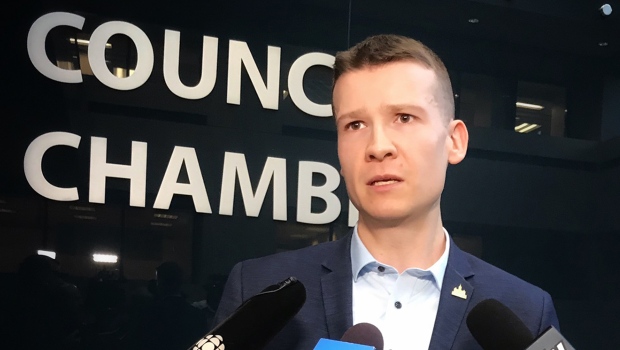 CALGARY – Calgary’s local elections are not scheduled for next October, but Councilor Jeromy Farkas makes it clear that he will throw his hat in the ring as a candidate for mayoral.

The Ward 11 representative made the announcement Wednesday morning in a video posted on social media that promised to run on a platform with “responsible spending, transparency and opportunity.”

“We need to bring honesty and integrity back to town hall when we recover from the pandemic.”

First elected to the council in 2017 at the age of 31, Farkas became one of the youngest members of the Calgary city government.

He declined to enroll in the council’s retirement plan and transitional allowance on his first day as a councilor, and often spoke out against what he calls the council’s “secret meetings”.

“Keeping my word and rejecting this pension was the easiest decision I’ve ever made, but it was also the most expensive as it put me on a collision course with an out-of-touch company that can be in many ways Interest has brought yours to the fore, “said Farkas.

In his video at the start of the campaign, Farkas continues to talk about how he fought to ensure that residents in the now-destroyed Midfield Trailer Park receive higher compensation.

He says he remains committed to helping companies with huge security and protection costs near the downtown drug injection site and will fight to protect core services like police and fire services.

Other issues he raised include his efforts to get taxpayers to approve the full plan of the $ 5 billion Green Line LRT project. He also pointed to his request from the council to use its reserve funds to relieve taxpayers after a “massive 7.5 percent tax hike for coronaviruses”.

A native of Calgaria, Farkas says he has deep roots in the city and is proud to call Ward 11 his home. Coming from a family of entrepreneurs and teachers, he notes his proud Hungarian ancestry, who escaped the communist regime in 1956 to live a better life in Calgary.

Farkas graduated from Bishop Carroll High School and became an alumnus of the University of Calgary, where he successfully directed the Israel Studies program for eight years. He is also a member of the Manning Center, known for his work leading the Council Tracker project, keeping track of city council votes and the time he spends in closed session.

Farkas is the first official name on the mayoral ballot for Calgary’s next local election, scheduled for October 18, 2021.

Mayor Naheed Nenshi has not yet stated whether he will seek re-election for a fourth term.