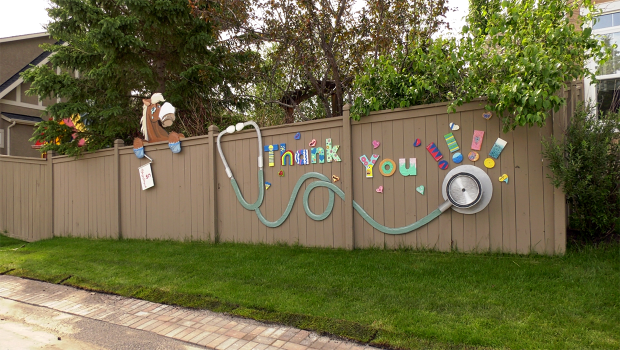 CALGARY – Tricia Fior loves to build and create: “When we walked in the house, I was building ten foot-tall paper mache Halloween trees and tombstones,” she said in an interview with CTV News. Fior uses the fence that surrounds her home in northwest Calgary to show off her creativity and usually celebrate seasonal festivities like Halloween and Christmas.

When Fior heard about all of the challenges the pandemic posed for doctors, nurses and medical staff, she decided to use her talents.

“I wanted to thank you in every way I could. I thought a ten-foot stethoscope was a good way to go.” She said.

Fior contacted the families by email and distributed the letters to each individual to ensure that the safety measures were disinfected and in place. “I told them to paint them what they wanted, whatever they wanted,” she said.

Cassidy Park lives down the street and said she always saw the artwork on the fence and decided to drop Fior a message and ask if she could help make something.

“I painted the (letter) Y as Homer Simpson and I also helped paint the horse,” said Park.

In addition to the stethoscope, Park and Fior built and painted a giant cartoon horse. In a mask, the horse hangs over the fence and holds a Calgary Stampede flag. There is a tear in its eye.

At the suggestion of Parks, gloves were added to the horses’ hands.

Park says being part of the mural project, “I just feel good inside.”

“We have so many kids in the neighborhood and I just thought it would make them happy.” She said. “I see them smile as they walk past the house, and I feel good when I bring happiness to the kids and the neighborhood.”

Juliana Litorco, a 12-year-old who lives nearby, also admires the mural. “I think it’s really nice and it’s a great way to say thank you to everyone at the front,” she said.

Fior said she was shocked at the interest. “I didn’t expect it, it’s just something on my fence, I didn’t expect that much attention,” she said, “but it’s good that so many people see and appreciate it and it brings a little luck.”

One controversial proposal could determine the future of development in Calgary