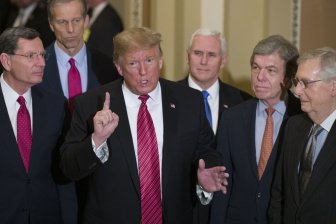 In the midst of turbulent times, the city of Calgary increases its risk tolerance.

“In order to respond to risks in uncertain times, our organization had to look for new, effective and innovative approaches,” city administrator David Duckworth told the city’s audit committee on Thursday.

Calgary’s water is likely to be safe after coal policy changes, and the High River area is worrying

An increased risk resulted from the coincidence of the coronavirus pandemic and the economic shock of the ongoing economic downturn that began with the fall in oil prices in 2015.

“These risk events and impacts will continue to be felt in 2021 and beyond,” said Duckworth.

“The first is that external and internal pressures may urge the organization to reduce the level of service,” said Duckworth.

“And the second area of ​​risk is whether the organization will be able to meet citizens’ expectations of what the city can do to contribute to Calgary’s economic recovery, as some of those expectations require tools and levers that are broader as that of the City of Calgary is currently available. “


2:15Calgary’s water is likely to be safe after changes in coal policy. High river area a problem

Calgary’s water is likely to be safe after changes in coal policy. High River area a problem – Jan 27, 2021

Ward 8 Coun. Evan Woolley, chairman of the committee that received the report, said the review gives context to the risks the city is facing.

“It is a great opportunity for the council to provide feedback on the actions we are taking to mitigate risk and to gain insight into the thoughts of the company,” Woolley said Thursday.

The city council will receive the full report at an upcoming meeting.

Reputational, economic, financial, social impacts and health, safety and wellbeing were the top five of the 17 main risks identified for the City of Calgary as a company. The risk of social impact, the growing social unrest due to changing social and economic conditions, has jumped into the top 5 since the last risk report the committee received.

The city is also facing financial constraints as the provincial government is delaying or cutting capital resources, requiring a tax shift in non-residential property values, and a budget that has not kept pace with inflation.

“We were on track to be as cost effective and efficient as possible,” said Duckworth. “And as a result, we unfortunately had to endure some service cuts, budget cuts and the ‘low hanging fruits’ are really gone.”

Duckworth also highlighted how the pandemic and the restrictions that came in to moderate the second wave were “causing damage to a weakened economy.”

“A recovery is expected at uneven rates, with some industries responding faster than others.

“The shift to remote working and the lack of business travel and tourism are having a negative impact on the attractiveness of our inner city.”

The city plans to draw on its economic resilience and financial task forces, as well as existing business-friendly strategies, to help with a post-pandemic recovery.

Duckworth said the city’s integrated risk management team used “critical uncertainties” – such as changes in commuting habits, downtown vacancies, social unrest and protests – to encourage “a new mindset” within the city council in the spring of 2020.

“Identifying and discussing critical uncertainties as part of the strategic foresight process aimed at building plausible futures, testing assumptions and ultimately reducing the likelihood of being surprised,” Duckworth told the committee.

Woolley said the risk should be understood and mitigated, rather than avoided, and pointed to large projects like the Green Line.

“There are risks involved,” said Ward 8 city council. “But we do it as citizens and as a company for the benefits.

“That’s why it’s something that we always do better in the city if we deliberately take risks and have a good understanding.”

Duckworth said Calgary, its citizens and businesses have changed, and the city council is changing its view of risk.

“We can no longer afford to avoid risk,” said Duckworth.

“We need to find ways to seize opportunities and take risks to support innovation.”