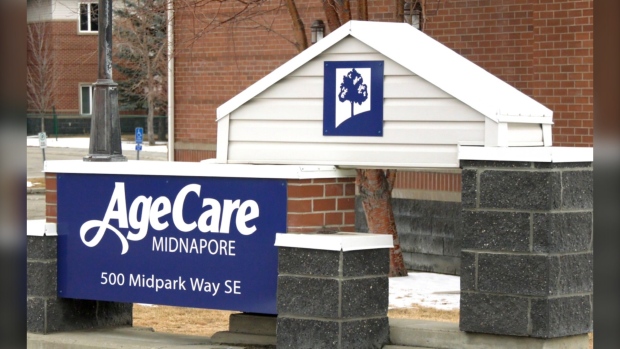 CALGARY – Residents at another retirement home in Southeast Calgary are being tested for COVID-19 following a reported respiratory disease outbreak.

In a letter to local residents, family members and friends, AgeCare Midnapore officials say they are waiting for test results, which should arrive “in the next few days.”

“There are a lot of respiratory viruses floating around right now, but we are taking every precaution to ensure the safety of all of our residents,” the letter said.

Staff are following the outbreak protocol, which includes improved cleaning and disinfection.

The facility in the 500 block of Midpark Way SE also limits visitor numbers and activity to limit the potential spread.

“Alberta Health identifies essential visitors as those who provide care and escort services necessary for the resident’s welfare and visitors who care for a dying resident,” the letter said.

“All group recreational activities have been discontinued and alternative approaches to engaging and socializing residents are being used.”

Health officials said last week COVID-19 outbreaks were detected in at least nine facilities across the province, most of them in Calgary, including another AgeCare center in Seton.

The nine retirement homes include:

Officials also reported that an eleventh person died of complications on Monday at McKenzie Towne Continuing Care Center, also in southeastern Calgary, which was the hardest hit.

In a statement released late Monday afternoon, a Revera spokeswoman said, “We offer our condolences to her family and friends.”

Dr. Deena Hinshaw, Alberta’s chief medical officer for health, said Monday that testing protocols will be changed to include all Albertans over 65 who experience symptoms.

As of Monday, 1,348 cases of the virus had been recorded in Alberta, of which nearly 300 are considered cured. There have been 24 deaths attributable to complications from COVID-19.