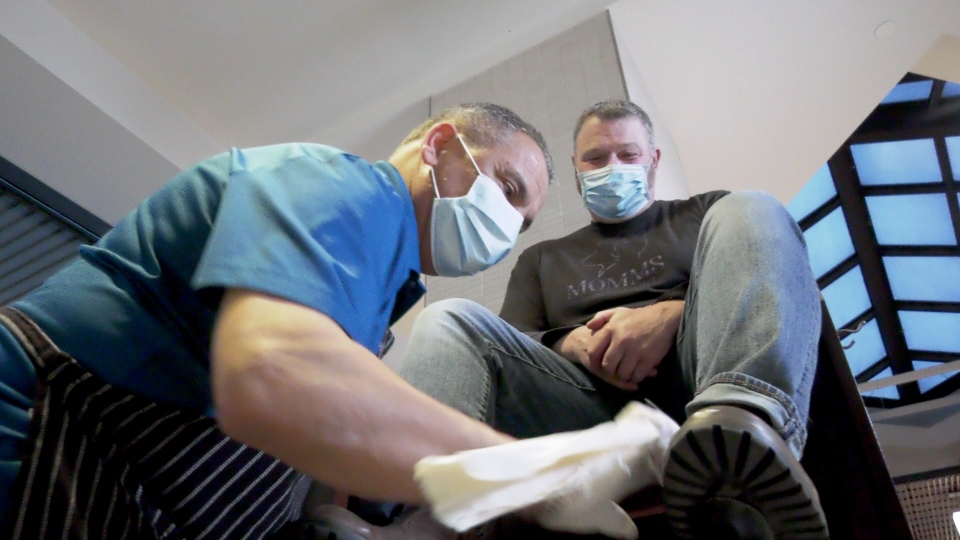 CALGARY – For the past 36 years, Pat Dardano has polished the shoes of office workers in downtown Calgary. His shoe-shine booth at a Plus-15 entrance to Fifth Avenue Place used to be on the bank of a river of downtown workers moving between office towers.

“It was pretty busy down here from morning until the end of the day,” said Dardano.

“Only at lunchtime you couldn’t even move out of the traffic here.”

Today this river of humans has almost dried up. Moving from home during the COVID pandemic, accompanied by an economic collapse that saw many Calgary offices cut staff, has kept pedestrian traffic in downtown Calgary to a minimum.

“Of course everyone is affected by this downtown COVID,” said Dardano. “It was pretty quiet.”

For the few who still come downtown to work, Dardano has also noticed a casual wear trend that blends in with his business.

Chris Malmberg, one of Dardano’s loyal customers, recently saw him sitting idly at his booth and wanted to help.

“And you know what, all this time … when the shutdowns happened, Pat was here while the Plus-15 were open,” Malmberg said. I wouldn’t have any customers or shoes in front of him. “

Malmberg used social media, called LinkedIn contacts to help Dardano, and wrote, “I thought I was going to pose a challenge that would help him and also get you a few points with your spouse. Get some of your spouse’s shoes this weekend and bring them to Pat next week so we can keep him busy. “

Malmberg expected a few hundred people on his LinkedIn network to see the publication. It far exceeded his wildest dreams.

Online goodwill has turned into real business for Dardano, who saw an almost immediate business surge.

“It was busy last week, it was actually busy.” said Dardano.

“I can only deal with so many just because I’m just me, right?” Said Dardano.

“I can only take so much. But actually it’s amazing. “

This isn’t the first time Dardano has been overwhelmed by the support from its customers.

He has an autoimmune disease and required a kidney transplant in 2012 to survive.

Then, out of the blue, Randy Haatvedt, one of his customers, offered to donate his.

“There was time in my life when I thought I would like to contribute more, but I wasn’t sure what it would look like,” Haatvedt told CTV after the operation.

“For a lot of people that could mean finding a charity and writing a check, and there’s nothing wrong with that … but there are other things to do.”

Dardano says he doesn’t quite understand why he has generated such loyalty from the folks in Calgary’s office towers, and says he is just trying to be a friendly ear to his customers.

“You relate to the customers telling you stories about life in so many different ways, and we talk about everything from sports to weather to everything else, you know, pretty amazing,” said Dardano.

“I think because they feel good when they leave, of course I feel good. It’s pretty amazing. It’s incredible. It’s a great thing for everyone. For me and actually for her. “

While Malmberg is thrilled to see how his Linkedin Post numbers are skyrocketing, he’s not surprised that Dardano is personally supported.

“I mean, here’s a guy who shines downtown shoes every day, and he has more respect for the people of downtown Calgary than anyone in Calgary,” Malmberg said.

“It just shows that it’s not the job that makes you important. This is how you treat people. And that’s why Pat is the most important guy downtown. “