Return of summer: Calgary will feel like 24 ° C next week 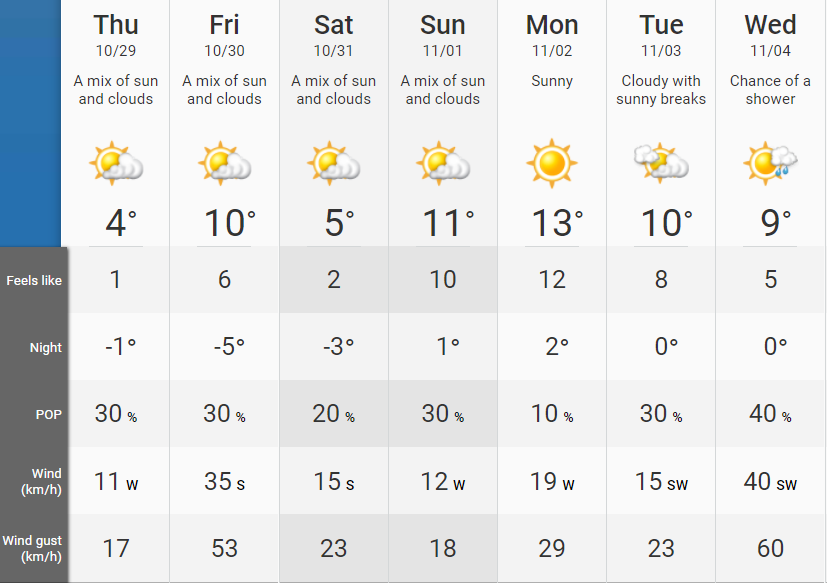 Either we go back to the summery weather or that was a typo.

Environment Canada is forecasting a high of 24 ° C for early November in Calgary, which jumps by more than 10 degrees between November 1st and 2nd.

Huge weather and temperature fluctuations are not uncommon here in Calgary. Sudden snowfalls and chinook winds keep us busy, but anything above that 24 ° C may just be too good to be true.

The forecast of the weather network for November 2nd offers a milder (if still not freezing cold) forecast of 13 ° C high and sunny skies.

Environment Canada also shows weather extremes for each day, and the warmest day of November 2 was 1969, when it peaked at 21.7 ° C. For the 24 ° C forecast to come true, the record would have to be broken above 2 ° C.

10 companies looking to hire in Calgary this December

It’s not impossible for temperatures to break well into the 20s in November, but we won’t get our hopes up too high for the eleventh month to tan the weather.

The weather in Calgary has changed a lot in the past few weeks. Our first big snowfall almost melted when temperatures warmed up again in late October.

Compared to the previous year, in which record-breaking snowfall was already recorded at the end of September, this autumn was actually rather mild.

Regardless of whether we see a high of 13 ° C or 24 ° C at the beginning of November, the Calgarians should still enjoy it while they still can – as freezing temperatures are likely just around the corner.

Jonathan Kay: Imported US Culture War about as Canadian as the Dallas Cowboys

The Church in Calgary promises to oppose COVID-19 restrictions

10 companies looking to hire in Calgary this December