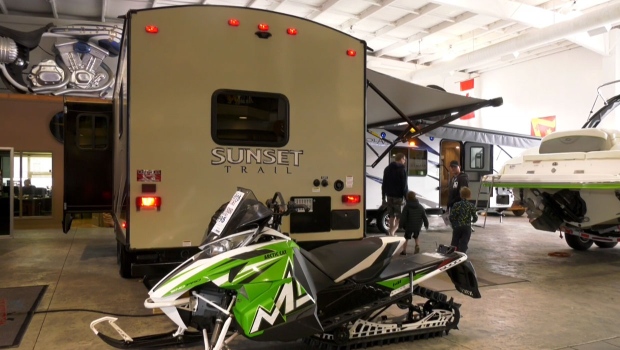 AIRDRIE, ALTA. – Southern Albertans seem excited to explore the beauty of their backyards this summer as interest in RV camping rises.

For Western RV Country in Airdrie, May couldn’t be more different than April.

Much of the workforce was laid off in the first few weeks of the pandemic.

Now almost the entire workforce has been brought back.

“Our business can’t keep up, (our people) slam 8am to 9pm every night to get these trailers ready,” said Brandon Urban, operations manager. “We didn’t expect a huge increase.”

Scott McKnight of Calgary bought a brand new trailer Saturday after he and his wife assumed they were upgrading from their tent trailer.

“We’ll be spending a lot more time in our RV than traveling to other destinations that we would normally go,” he said.

They plan to camp on Crown Land with their two dogs later this month after canceling a summer trip to California.

McKnight believes there are plenty of others out there finding new ways to go on vacation.

“I think there will be a lot more people involved in camping and Alberta is a great place to camp. Within 45 minutes of our house are the most beautiful mountains in the world. “

Amy Wong and her family often only camp in their Airstream last weekend.

“I think people really need a change of scene now,” she said.

She says she isn’t surprised that others have gone to adventure camping.

“The reason people love camping is because you don’t have the same place every weekend that you go to a new place.”