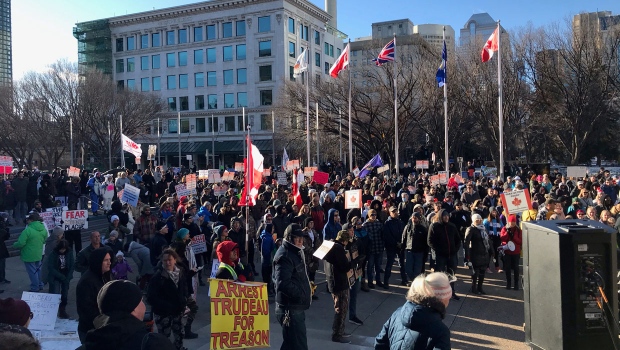 CALGARY – A grassroots movement calling itself the protector of “civil liberties and free democratic society” takes to the streets again after a controversial vacation in Calgary.

This time the movement is fighting for the support of companies that have been ordered by the government to remain closed until January 21st.

Organizers also want attendees to show up in beach attire and Hawaiian free time to alert the Jason Kenney government of several UCP MLAs who were not staying home for the Christmas vacation but traveling to tropical destinations.

“Politicians and government officials ran away to gamble in Hawaii while Albertans were told not to see their families and suffered business closings and bankruptcies for the common good,” the post said.

“The Albertans can see clearly through this charade, and they will not take it any longer!”

Last week, Kenney announced that the restrictions that went into effect in December would stay in place until at least January 21st.

He said the rules would stay in place because Alberta’s hospital stays and positivity rates are still way too high.

However, all K-12 schools could reopen on schedule.

“We need to see what impact the holidays have had on the tests and of course we also need to prioritize the reopening of the schools and begin to see what impact this can have,” he said on Jan. 7. I am confident that this will not accelerate widespread social transmission – it has not in the past. “

The Prime Minister also addressed the issue of UCP MLAs and other senior government officials traveling overseas, while health officials advised throughout the pandemic to avoid any non-essential travel plans.

He stressed a new policy for all government officials, saying that there would be consequences for anyone who breaks it.

“I think the expectation, a very correct expectation of Albertans, of a higher standard of behavior applies to people who hold significant positions of public trust. I have defined this as elected officials as well as high-ranking political figures making key decision-making positions and Alberta public officials. “

Six MLAs as well as Kenney’s chief of staff either resigned or lost their duties when it was revealed that they were traveling to international destinations such as Hawaii, Mexico and the UK over the Christmas break. The changes came after the Albertans protested on January 1 against Kenney’s decision not to discipline anyone on the matter.

“We must continue to show the Albertans that we have learned the lesson, we have heard it and we have to rebuild a culture of discipline and humility.”

The Freedom Walk protest begins at 1 p.m. at the Calgary Court Center

(With files from CTV Edmonton)