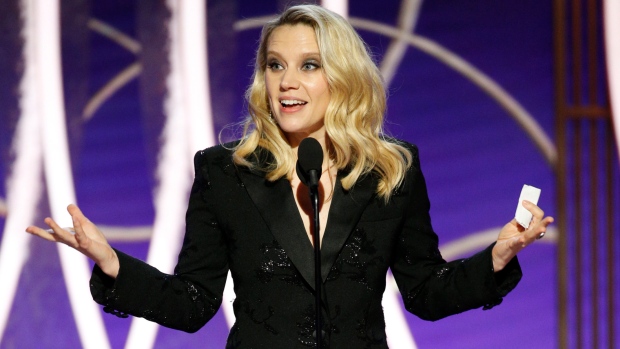 MONTREAL – The latest installment of “Saturday Night Live” had a Canadian-themed sketch that included references to Drake, “Degrassi”, Longueuil, and the Jacques Cartier Bridge.

“Live from Montreal! Montreal the best parts of Canada and the worst parts of France,” said host Jean Lawrence, played by Bowen Yang.

“Bonjour-hey Jean,” said Anne-Marie, played by Kate McKinnon. “I got an injury while sleeping with a Cirque du Soleil actor. I choke on the big scarf.”

Guest presenter Issa Rae plays a Toronto correspondent who stands in front of a green screen image of Toronto’s waterfront for a news channel segment called “Drake Watch,” holding a microphone with the CBC logo on it.

Rae and two newscasters with French accents talk about whether she’s seen the Toronto rapper.

Rae says she mistook him for a man in a wheelchair, which is a reference to Drake’s character Jimmy Brooks from his time on the Canadian series “Degrassi: The Next Generation”.

The Anchors also chat to each other, dropping Brossard, Frontenac, Longueuil, and other Quebec isms.

“Yes? Or no? I’m sorry I don’t speak French,” says guest Jean-Fred Desjardins (an American journalist from Detroit who was quarantined in Canada), played by Mikey Day.

Fittingly, the sketch ends with the hosts bringing out a karaoke version of Celine Dion’s “That’s the Way It Is”.

There were several other Canadian elements in the “SNL” episode on NBC and Global – Toronto-born actor Jim Carrey returned to play US Democratic presidential candidate Joe Biden and Stratford-Ontario-raised pop star Justin Bieber the musical guest.

– with reports from The Canadian Press.

More than 15,000 public health violations have been reported in the Calgary Zone since the pandemic began