The Calgary business owners were excited, yet cautious, when they reopened their doors 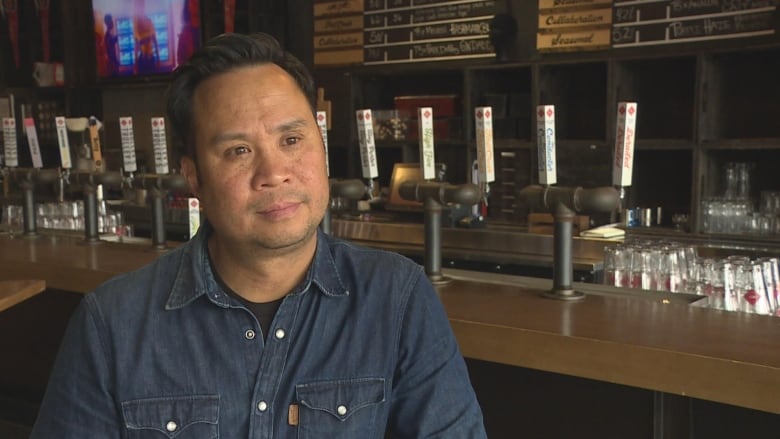 It was a sight Calgarians hadn’t seen in two months – diners sitting at restaurant stalls receiving drinks while chatting with their friends.

“I don’t like change, so it was really hard for me to be isolated because I’m always on the move,” said Sue McBride, who said it felt amazing to sit down and have a coffee at the Higher Ground Cafe Monday.

For many business owners across Calgary, however, the excitement of reopening came with the stress of making sure customers and employees are safe.

On Monday, the city joined the rest of the province in Phase 1 of its relaunch, allowing salons and barbershops, as well as cafes, restaurants, pubs and bars to reopen to enable table service at 50 percent capacity.

The day before, Ernie Tsu’s employees went through a so-called dress rehearsal. They went through the applications to make sure the Trolley 5 brewery’s waiters and bartenders are prepared for the extra disinfection and distancing measures they would have to take when the bar reopened.

“We’re doing a complete dry run,” said Tsu, who is also a board member of the Alberta Hospitality Association. “We got extra sidewalk [for] Patio space too, so we’re getting this all measured as we speak. “

These companies were given the go-ahead to reopen May 14 in the rest of the province, but the cities of Calgary and Brooks have been slower to reopen due to higher numbers of COVID-19 cases in their regions.

Calgary restaurants are allowed to reopen on Monday. The owner of Prairie Dog Brewing explains the challenges he faces in today’s COVID-19 world. 3:56

As of Sunday afternoon, there were 629 active cases in the Calgary Zone out of a total of 801 in Alberta.

Despite the government’s OK, some business owners are proceeding with caution.

Bruce Campbell, who owns three Red’s Diner locations in Calgary, said it took a month to properly close his restaurants and it will now take time to order groceries and keep staff up to date on new safety protocols .

He’s going to take it step by step and open dinner over the next few weeks, and if all goes well, the others.

“We just want to make sure we don’t open and find out that we have to close again within a few days or a week,” he said.

Once the diners reopen, the customers’ temperatures are measured and they have to fill out a questionnaire before they eat.

Other business owners said they felt ready for Monday.

Phillip Elliott opened Social Cut and Shave with two meters between each station, personal protective equipment for hairdressers and extended working hours to meet the increased demand for haircuts.

“I’ve been doing this for a long time and I’ve never been forced to close. I’m really looking forward to coming back to this,” said Elliott. “I’m a little nervous, but I think all in all it will be really good.”

Organizations must follow a number of health and safety guidelines, and those who break the rules can face closure orders or fines.

The Higher Ground coffee shop has been open for take-away since May 14th. John Nicastro said with additional measures such as disinfection and barriers between baristas and customers, they would be prepared for the dine-in service. 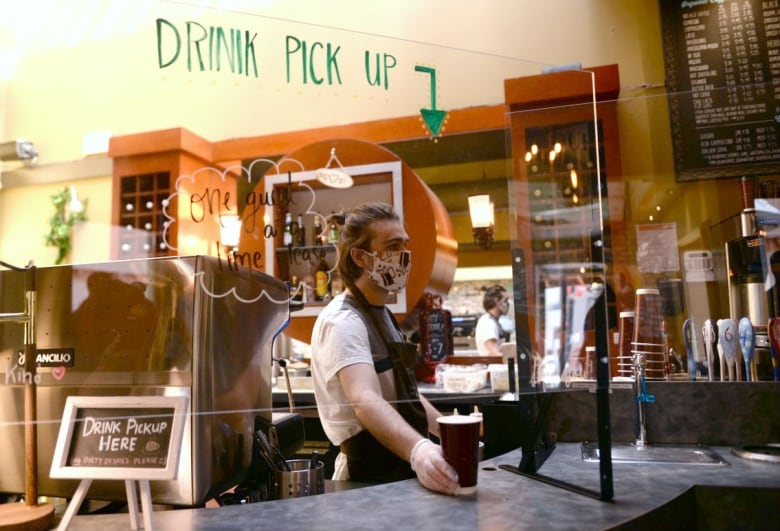 A barista pushes a coffee to a customer behind plexiglass in the Higher Ground Cafe in Calgary. The cafe will reopen for dine-in on Monday as the city eases some restrictions. (Helen Pike / CBC)

“I think the social element of sitting down and meeting people is really important. It’s just nice to have the community, they’re an amazing community and they’ve been waiting for us to open again,” he said.

“We are aware of the mandates that have been put in place, so safety is paramount.”

Nearby, on the terrace of the Side Street Pub and Grill, Michael Conboy was enjoying the sun.

“The avenue seems to be a little livelier today. Obviously the standards are there, the people are keeping their distance, you know they set the tables accordingly, but it’s just nice to have a seat open based on what we have see.” I’ve been through it, “he said.

Conboy said customers need to take precautions and realize that they will have a different experience than they are used to, but said that it is still good to be back. 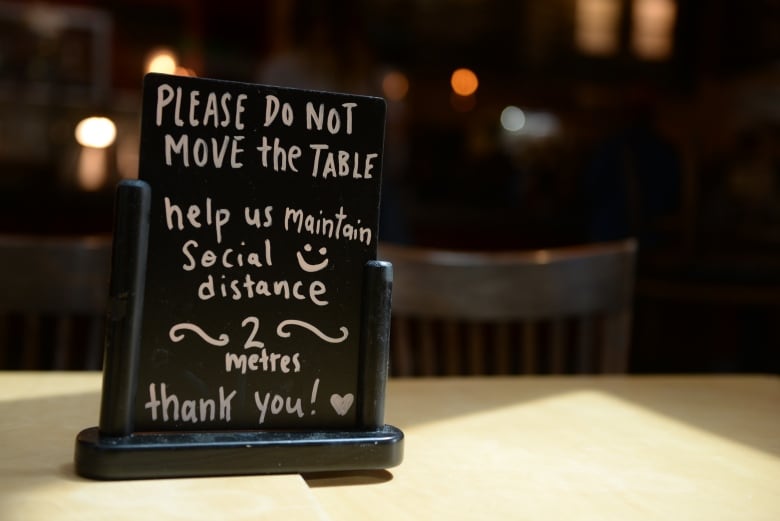 A sign in the Higher Ground Cafe tells customers not to move tables that are set up to be within two meters to prevent the spread of COVID-19. (Helen Pike / CBC)

For Ron Magnuson, this week’s reopening coincides with his first-time physical distancing store opening for the first time.

At Sola Salon Studios, 25 stylists are opening in their own separate small studios, a concept that was in the works for months before the pandemic.

“We were naturally geared towards face-to-face contact,” he said.

“It will be different, it will be fine. It will require some adjustments.”

The province is aiming for a mid-June target for phase 2 of its relaunch, which will see more companies and services reopen with additional guidelines.

This Calgary church is setting up a giant Christmas light display