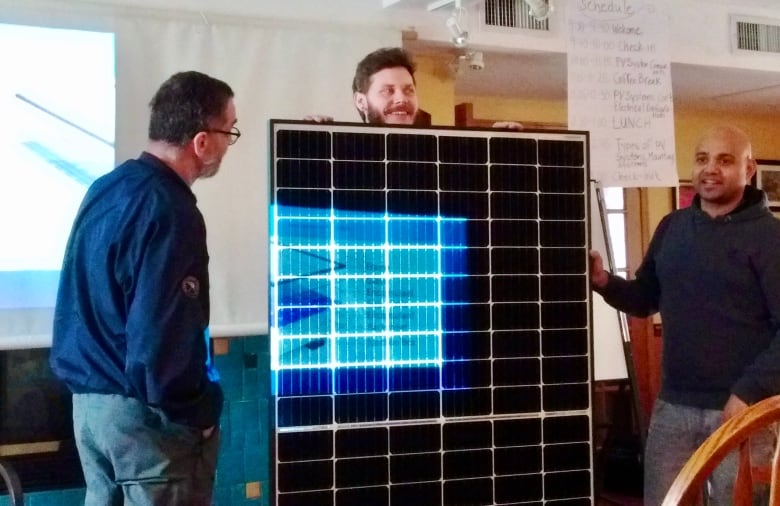 A Calgary cooperative celebrates an important milestone in its history: Finally solar.

It consists of 18 townhouses overlooking a common courtyard and community garden, creating a close and sustainable community.

The communal living space consists of a kitchen, a dining room, a lounge, a children’s playroom, a youth room, a laundry, a guest room, an office, a studio, a workshop and a storage room.

The new solar project, which has been in the works for two and a half years, means the community is now generating all of its energy needs and fulfilling one of its longstanding guiding principles of environmental sustainability.

“Having solar has always been part of the dream,” said one of the driving forces behind the project, Lise Rajewicz.

“But it was very expensive for the community back then. But as the cost went down, we realized there was a chance now to re-examine that possibility,” she said.

Lise Rajewicz is one of a group of neighbors who have come together to make the project a reality in their community in northeast Calgary. (Submitted by Lise Rajewicz)

Rajewicz has teamed up with two neighbors to finalize the project and partnered with SkyFire Energy of Alberta to do the installation.

“While solar is a drop in the ocean to tackle climate change, we think it is a really important symbolic step to show that it is important to take action, no matter how big or small it is,” said Rajewicz.

According to Rajewicz, the project was not without its challenges.

“There was a complex measurement system and that was a challenge that we had to face, but we could do it. There was also the buy-in from the community,” said Rajewicz.

She says they have received a grant from Energy Efficiency Alberta under the previous NDP administration to bring solar education workshops to their community, to learn about the technical ins and outs of solar energy, as well as the various social and environmental arguments for making the jump to inform.

“That was the key piece,” said Rajewicz. “It really made us safe.”

The community received funding for months of solar workshops to learn more about the technology before proceeding with their project, which took over two years from start to finish. (Submitted by Lise Rajewicz)

“In the workshops we discussed topics ranging from climate change to energy democracy and security to environmental stewardship and our responsibility to the entire Calgary community,” she said.

The completed project, which cost $ 210,000, resulted in the installation of 100 kilowatts of solar panels with 302 modules mounted on all 18 roofs of the community.

It produces 106 percent of the community’s annual electricity needs, with the project running smoothly for the past four months.

“We’re so proud of it and it’s a really tangible reminder of what we’ve achieved together,” said Rajewicz.

“It shows what you can achieve when you make caring for one another a priority on this planet,” she added.

Now the community hopes to inspire and share the lessons learned with other cooperatives in Alberta and beyond.