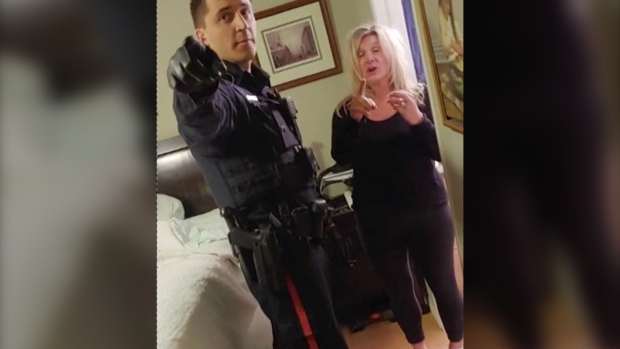 CALGARY – A Calgary woman accuses two city police officers of breaking into her home, assaulting and kidnapping her in an October 2019 arrest that was videotaped of her son.

She is now asking for a formal investigation and saying she wants the officers involved to be charged with assault.

Tara Yaschuk claims she was home around 1:30 a.m. on October 22, 2019 when two officers – identified in documents as Const. Desjardins and Const. Lavictoire – entered the house unbidden, went up the stairs and forcibly arrested her. She was taken to the District 2 division and detained for several hours, then released without charge.

Yaschuk had called 911 that night and believed that her partner’s vehicle had been stolen from the driveway.

A testimony from Yashuk’s attorney, David G. Chow, said that while talking to the 911 operator, Yashuk’s son picked up the phone and said he and a friend actually borrowed the vehicle to go to the store and have been since then returned.

The statement says that the boy’s stepfather then says something like “I’m going to strangle you” in the background. It was a hyperbolic comment which means he wasn’t serious.

The police arrived soon after.

“It is noteworthy that during the illegal arrest of Ms. Yaschuk, a cell phone video shows that Const. Lavictoire was weighted with his knee on her back while she was lying face down on the floor,” the statement said of the lawyer. “In a video recording Ms. Yaschuk’s incident, you can hear her say, ‘I can’t breathe.’

At one point in the video you can hear Yaschuk asking the police: “Who let you into my house?”

You hear an answer saying, “Nobody.”

During the fight, Yashuk can also be heard asking why she is being arrested, and an officer replies that it was an attack on a peace officer.

The Calgary Police Department confirmed that a complaint had been filed with the Professional Standards Department, but declined to make further comments.

“A thorough investigation will be conducted using all available evidence, including the video of the incident recorded by the family,” the police said.

None of the allegations were examined in court.