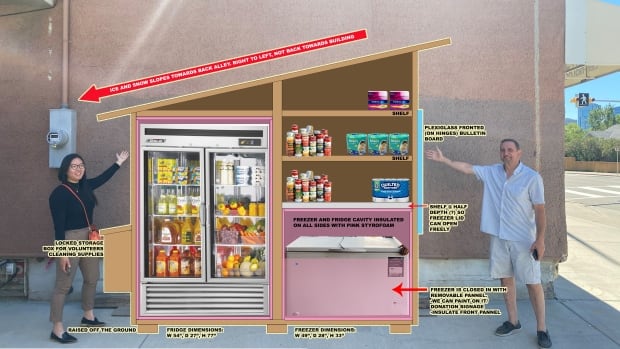 A group of friends are raising money to build a community refrigerator in Calgary’s northern Crescent Heights neighborhood.

Megan Kirk said the idea came after some friends took on a similar project in Toronto. She and three friends decided to set a fundraising goal of $ 5,000 – it reached more than $ 13,000 in just three days.

“We really thought it was a slow burn and it exploded,” said Kirk.

The refrigerator is located outside of 902 Center Street North on the Tigerstedt Block.

Community members, restaurateurs or grocers can donate food to fill the refrigerator, which can later be picked up by those in need free of charge.

It will contain shelves for dry goods or items such as tampons, a two-door industrial refrigerator and a freezer. Unlike the small free pantries around town, the addition of the refrigerator allows people to access perishable items like fresh produce.

An artist will decorate the site with a mural, and a woodworker will make a weatherproof shed to house it. It will be available 24/7. The refrigerator was bought for $ 50 from a store that was no longer in use, and the freezer was donated from Tokyo Street Market, which is in the same block as the refrigerator’s future location.

Similar refrigerators have been set up in Edmonton, Toronto, as well as in the UK and USA

Sasha Lavoie, another member of the group behind the project, said the pandemic had highlighted food insecurity issues in Calgary.

“We felt that this was just a need that could be met,” said Lavoie.

Kirk said they have already received heartbreaking messages from community members who have faced difficulties and look forward to the chance to give back.

Ideally, Kirk said, this refrigerator will be a pilot project – and will provide a framework for setting up other refrigerators around the city.

“The hope is that this will get bigger than expected and that it will be owned and designed and operated by the community for the community,” she said.

Work on the shed is underway and the group is hoping to have the fridge up and running before the end of the month.