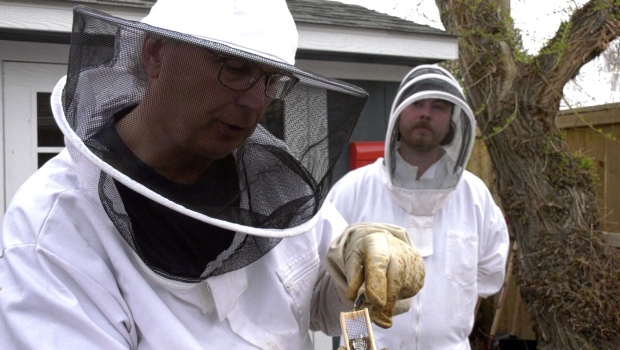 CALGARY – A local family owned honey company thanks a new initiative to bring its products to buyers.

Bear Bait Honey says there were problems in more ways than one way during the pandemic.

“We ran out of honey in March and found it difficult to replace it,” said owner Herman Van Reekum. “Lots of beekeepers are importing new colonies from New Zealand and that was closed this year because of COVID.”

The family has a hard time producing honey thanks to a broken supply chain. Van Reekum says they knocked down tens of thousands of bees, which forced Bear Bait to divide the colonies it already needs to do more.

After the pandemic and enforced market restrictions, Van Reekum knew they were facing a tough summer.

Luckily for the family, a much larger Canadian store stepped in last week to help.

London Drugs’ Local Central program aims to give small local businesses the opportunity to sell their product to a wider market during a difficult time.

“You see people struggling to get their items to their customers,” said store manager Benjamin Pullein. “Farmers markets are closed, shops are closed.”

Bear Bait Honey is one of 20 companies selected by London Drugs to be available in Calgary stores.

According to Pullein, 1,200 companies have applied for the selection and he hopes more will be sold soon.

“Logistically, (Bear Bait) had a product on hand that we could use to get to stores quickly.”

An April Statistics Canada report showed that 57 percent of Alberta businesses had seen sales declined by at least 20 percent since March. Almost a third of companies in the country saw sales decline by more than 40 percent.

Most of the small businesses in Calgary have had to switch to delivery or pick-up options in order to continue to make money and keep employees.

Van Reekum said the family are also out and about to deliver home, but the boost from London Drugs is “enormous, both in terms of sales and notoriety”.