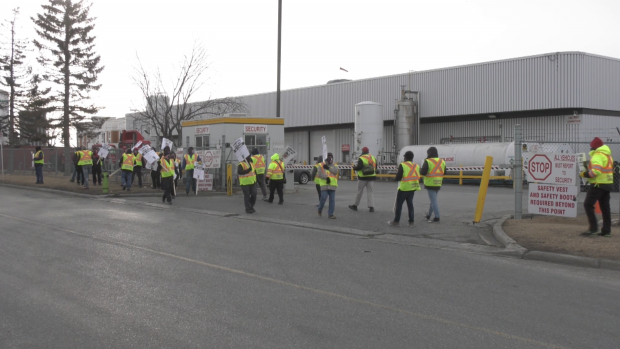 CALGARY – The union, which represents 268 workers at the Coca-Cola Refreshments plant in northeast Calgary, confirmed that workers were involved in strike action on Monday to protect their positions.

According to Teamsters Local Union 987, the strike is in response to job security concerns about the use of third party vendors and may cause delays in the delivery of beverages to shops and restaurants.

The union said 94 percent of workers voted to go on strike on March 4.

“Coca-Cola employees just want to get their jobs done with some degree of predictability from their employer.”

The strike, which began at 9 a.m., was attended by warehouse, production, sales and equipment service workers

Penner said the company was unwilling to add a job security language to the collective agreement.

“At that point, the membership said that we were no longer okay with drivers coming in and taking over some of our cargo while other employees – Cola drivers, who have been here for a number of years – are sitting at home without work,” explained Penner .

“We have more than 260 families whose livelihoods are affected by this strike. This is not something anyone takes lightly. Not something they wanted to do, but they realized they had no choice but to take that stand and accept.” say enough is enough. “”

According to Teamsters 987, negotiations began in September 2020 and the previous agreement expired in October 2020.

After long delays, buses with apparently non-union replacement workers were brought in in the afternoon. It also prevented tractor units from driving away for several hours. Picket workers said the trucks were loaded with Coca-Cola products ready for delivery.

“As long as we have equipment, as long as you have the skills and abilities, we will make this work available to you,” he said. “The company says it’s way too restrictive.”

“It has nothing to do with money, it’s just about protecting jobs and allowing them to take care of their families.”

“We have a number of drivers who have been around for several years,” said Penner. He says one member has been with the company for more than 12 years. “And yet we have third-party vendors who come in and move products.”

Calling it “an unnecessary and unfortunate situation”, Coca Cola Canada added that the company offers salary increases and “other improved working conditions,” but said it needs to meet the demands of its business during troubled times.

The full explanation can be found below.

“After months of negotiations and several mediation meetings, we are disappointed that the union that represents workers at our Calgary plant has decided to stop negotiations and go on strike. This is an unnecessary and unfortunate situation.

“We have reached agreement with the union twice, but none of these agreements have been ratified by the union membership. It is important to note that we did not seek any concessions during the collective bargaining process. We have put forward a proposal that is stability, offers wage increases and long-term other improved working conditions while meeting the needs of our business in these extraordinary times.

“We are committed to the collective bargaining process and ready to return to the negotiating table to find a solution as soon as possible.

“I am sure you will appreciate that all further details of the negotiations are confidential.”

The Calgary pastor calls the police “Nazis, Gestapo” during the COVID-19 check on Easter weekend