Under the Fourth Avenue flyover in Calgary, students see the vision of a park come true 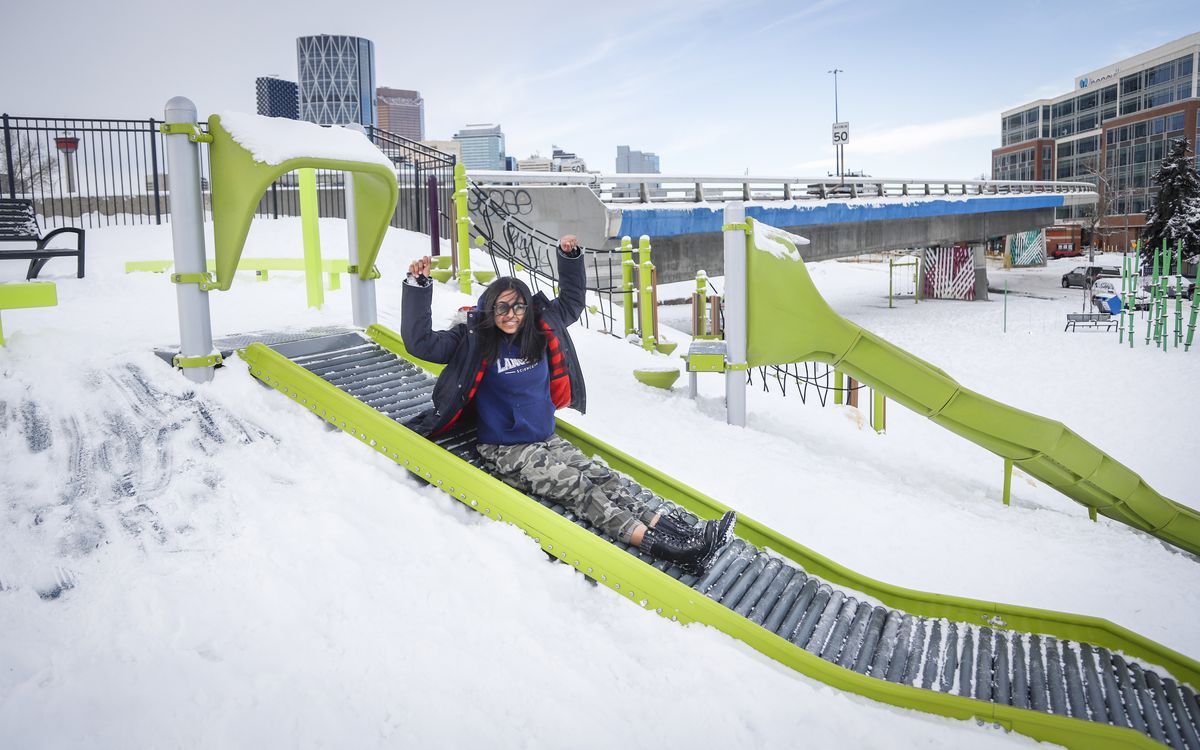 Aryanna Gaidhar, who is in 10th grade, is exploring Flyover Park, which she helped create in 6th grade in Calgary on December 28, 2020.

Four years ago, when Aryanna Gaidhar was a 6th grade student on the Langevin School’s alternative science program, her class became interested in a neglected space near her school.

The place in the Calgary parish of Bridgeland-Riverside, under an overpass leading into the center of town, felt forgotten and unsafe. This contrasted with the many beautiful rooms that the 56 students and their two teachers had explored on walks in the community and led the class to the question: could this free area be changed?

Aryanna and her classmates envisioned the desolate area under the Fourth Avenue flyover as an inviting and fun park, and worked with students from the University of Calgary’s landscape architecture program to develop design concepts.

Earlier this month their vision became a reality with the opening of the Flyover Park. Calgary’s first underpass park features colorful slides and swings, a climbing jungle, and games like tetherball, ladder throw, and table tennis.

“It was so cool to see something that was just a dream in our 6th grade and brought a potential idea to life,” says Aryanna, who is now a 10th grade student.

“We sit in class and learn about the democratic process and how we have the power to change something, but we never get the chance. So this was our chance. “

This group of students was “super curious,” recalls Kate Logan, 6th grade teacher, and really wanted to get involved in their community.

At the same time, Ali McMillan, a resident of the Bridgeland-Riverside Community Association, had also been exploring the potential of space, and it was just that their daughter was in Ms. Logan’s class.

The relationship with Ms. McMillan resulted in further partnerships between the school, the community association, the City of Calgary and the University of Calgary.

“We brought all of these interests together and identified this Fourth Avenue flyover as a room that definitely needs some TLC,” says Ms. Logan.

Throughout the 2016/2017 school year, students participated in a variety of activities related to the land under the flyover as part of a curriculum focused on democracy and citizenship.

There was a discussion with community members, including the nearby drop-in center, followed by working with university students and the city-led engagement with the public. The students even presented their final design in the town hall.

Throughout the process, Ms. Logan said the youth had seen how “even though they are under the voting age, their votes matter and they can be involved in some of these really important decisions in their communities”.

In 2017, then-6th grade student Miles Bazay spoke to the Calgary Planning Commission and explained how the final design incorporated many of their ideas, but the students weren’t given the anti-gravity chamber they originally envisioned .

Miles, now a 10th grade student, recently visited the new park. “I saw a few kids playing in the playground and it was great to see,” he says, adding that the room now feels a lot brighter and more welcoming.

For Ms. McMillan, it feels like this unloved and forgotten space at the gateway to the neighborhood could be a little more than she has championed the park over the years.

Initially, community members used small grants to experiment with simple ways to liven up the space, such as: Colorful pinwheels, tape art, table tennis, and designs painted on the street.

“People went by and said ‘oh cool, ping-pong!’, While the room was kind of deserted beforehand and was marked and graffiti-marked because nobody was using the room,” says Ms. McMillan, who is now planning and development manager at Bridgeland Riverside Community Association.

“The place seems like a redundant space, a negative space, but with the right treatment and activation that makes it an active play space, it brings a lot more positivity to the community,” he says.

To advance 6th grade students’ vision for the park, the community association worked with the nonprofit Parks Foundation Calgary.

Funding was provided by donors and government, including $ 1 million from both the Alberta government and the City of Calgary. The Parks Foundation oversaw the final design, development, and construction, which began that summer.

It was a complicated project, says Sheila Taylor, CEO of the Parks Foundation Calgary, because of the unusual location of the site and the large number of users to reach out to.

To this end, while kids will enjoy the more traditional play equipment, Ms. Taylor says there are also activities for adults, including games, a swing for two, and a tall “bamboo jungle” climbing structure.

“Many of the features of this park cannot be found anywhere else in Calgary,” says Ms. Taylor. “You can sit and swing under the flyover, and it feels like you’re swinging straight into the city center.”

The transformed room is not completely finished yet. A large light element that resembles a giant balloon tree is expected to be installed in January. Murals will be painted on the flyover and events will be held this summer when COVID-19 restrictions are lifted.

As more people experience the vibrant new park, they hope they will be encouraged to rethink the forgotten spaces in their own neighborhood.

“We hope this park will inspire others to find similar spaces in the city that have great potential,” says Ms. Taylor.

We have a weekly Western Canada newsletter, authored by our BC and Alberta office managers, that is a comprehensive package of the news you need to know about the region and its place in the problems Canada is facing. Register today.

Five more flights to and from Calgary with confirmed coronavirus cases