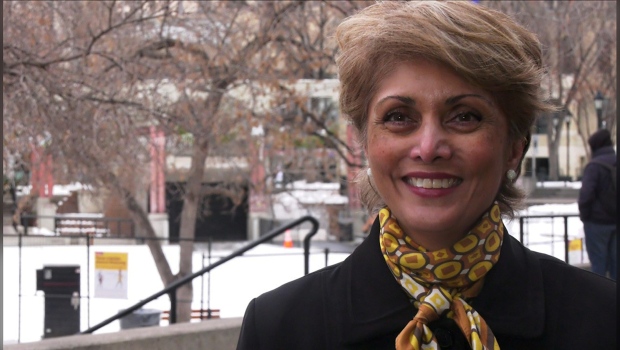 CALGARY- Ward 3 Coun. Jyoti Gondek has officially launched her campaign to become the next Mayor of Calgary.

Gondek, who was first elected to the city council in 2017, says her experience at the town hall makes her suitable for the mayor.

“I think the Calgarians are looking for someone to fix the ship, steer the course towards opportunity and prosperity, and really bring that sense of stability back so we can make some good, strong, and rational decisions,” says Gondek.

Prior to her tenure on the city council, Gondek volunteered with the Northern Hills Community Association and served on several community committees. She holds a PhD in Urban Sociology and worked at the Westman Center for Real Estate Studies at the University of Calgary’s Haskayne School of Business before earning the Ward 3 seat.

“I think every Calgarian is an investor. Once you decided to live here it was the most important investment you made and we owe you a return, ”she says.

If Gondek is elected mayor, one of the most pressing issues the city needs to find out is the impact of property values ​​as the Calgary business community begins to struggle.

Recovery from the effects of COVID-19 and a hard economy will be challenging, and Gondek says the city’s top job shouldn’t go to someone with no experience.

“My biggest concern for this city at this critical time is that someone new will come in without knowing what to unpack and fix.”

Gondek is the youngest seated city councilor to announce a run for the mayor and the second candidate to launch a campaign on Wednesday. Ward 11 councilor Jeromy Farkas announced his intention to run in September, and businessman and former Kerby Center president Zane Novak announced his candidacy on Wednesday.

Farkas and businessman Brad Field are the only ones who have so far officially submitted their papers to Elections Calgary.

“When Calgarians seek more of the same dysfunctional city council, there will be plenty of choice,” says Field.

“Calgary needs to be led and right now there is a gap in leadership.”

Although the local elections won’t take place until October, political experts say candidates will need to get started in order to gain voter recognition.

“You need to improve your profile and now you have 10 months, nine months to do it,” said Duane Bratt, a political scientist at Mount Royal University.

Mayor Naheed Nenshi has not yet announced whether he will seek re-election.

Bratt says early announcements from mayoral candidates, including two seated councilors, could mean they believe Nenshi will not run again.

In the coming weeks, several more people are expected to officially take part in the mayor’s race.

“You will see, when the number becomes too large, you will see how the serious fall off in the summer. Really, the campaign starts after Labor Day in earnest. But what happens before that is build a team, raise funds and get your name out there, ”says Bratt.

The Calgarians will vote on October 18th.

Experience a live circus from your private Calgary hotel balcony