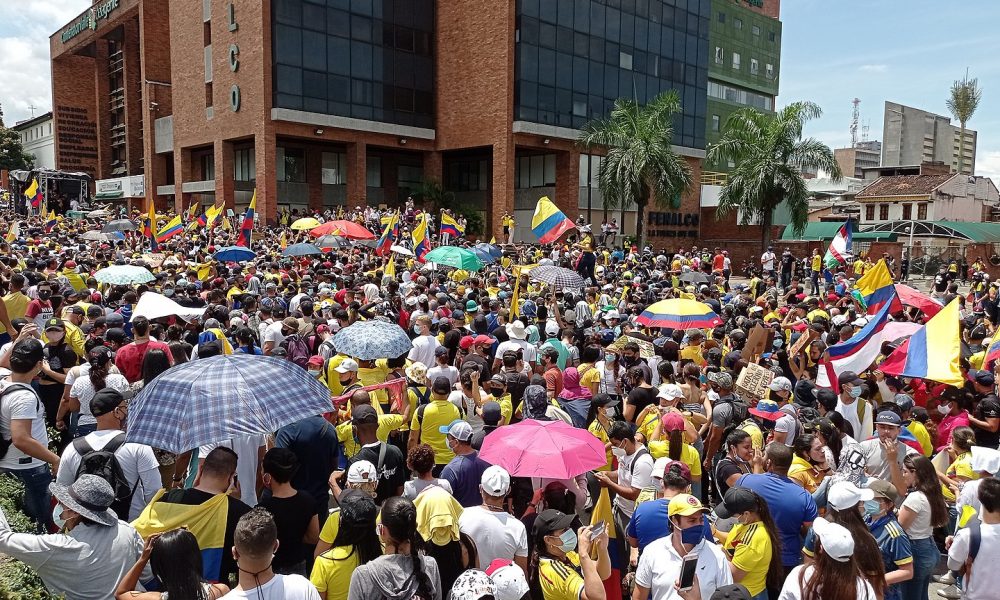 The Colombians followed up, and after massive demonstrations across the country, the government eventually withdrew the reforms and the finance minister resigned. The use of deadly force by the police against mostly peaceful demonstrators, however, fueled calls for better social and economic policies.

These demands include the dissolution of the Colombian anti-riot police (known as ESMAD), an improved health system, a basic income, more educational and employment opportunities for young people, guaranteed protection of social leaders and activists, and the implementation of the 2016 government peace agreement and the Revolutionary Armed Forces of Colombia (known as FARC).

calls for reforms of the Colombian security forces

The state’s violent response to the general strike has attracted worldwide attention. According to Temblores, a non-governmental organization that oversees police violence in Colombia, 3,789 police violence occurred during the nationwide strike. These acts include physical violence, arbitrary arrests, gun abuse, homicides, and gender-based and sexual violence.

In Colombia, as well as in the USA and Canada, calls for police reform have become louder in recent years. Last year, the Colombian Supreme Court ordered the government to guarantee the right to peaceful protests and to end the abuse of police force. The court’s ruling stems from excessive police violence during a national strike in 2019.

The government has started talks with the National Strike Committee, a coalition of workers and student unions and indigenous organizations, ostensibly to make this possible. However, there is skepticism that the government will implement the negotiation results. The strike committee recently suspended negotiations despite the fact that a preliminary agreement was drawn up.

Government officials have tried to minimize the protesters’ demands. For example, in an interview with Vice News, Justice Secretary Wilson Ruiz accused international criminal groups of using the protests to destabilize the authority of the state while denying the use of lethal force by the police. Similarly, the Defense Minister charged three prominent human rights defenders with terrorism and offered a reward for their arrest. https://www.youtube.com/embed/WB2isJA1JdU?wmode=transparent&start=0 A look at the Colombian riots from Vice News, including the Ruiz allegations.

Supervised by the Ministry of Defense

In contrast to other Latin American countries, the Colombian police force is controlled by the Ministry of Defense and not the Ministry of the Interior. State violence and the stigmatization of demonstrators, especially youth, are the legacy of the national security policy that served to rationalize and justify massive human rights violations during the decades-long armed civil war in Colombia.

Earlier this year, a separate peace tribunal found that between 2002 and 2008, during the presidency of Álvaro Uribe Velez, at least 6,402 people were murdered and falsely declared killed, including many young men from low-income backgrounds.

While the implementation of the peace agreement with the FARC provided an opportunity to rethink the role and structure of the state security forces, Duque’s Centro Democrático party has vehemently opposed its implementation.

Violence is rooted in structural racism

During the ongoing protests, the city of Cali became the epicenter of police brutality and repression, exposing deep-seated structural racism against Afro-Colombian and indigenous peoples.

The city has the second largest urban Afro-ethnic population in Latin America. A preliminary analysis by the Advisory Society for Human Rights and Displacement shows that police brutality was highest in low-income, marginalized neighborhoods with a significant Afro-Colombian population. These neighborhoods also have a higher concentration of “resistance points” where barricades and roadblocks were erected during the demonstrations.

In Cali, indigenous peoples are also the target of racist violence.

When a coalition of indigenous groups, called “minga indigena” in Colombia, marched into the city, armed civilians blocked its entrance and shot at it. Twelve indigenous people were injured, including Daniela Soto, a well-known indigenous leader.

Instead of condemning the attack, Duque urged the indigenous Minga to leave the city and return to their territory in order to avoid “unnecessary confrontations”.

The media play an important role in forming public opinion on important issues. The coverage of the protests last month has shown the extent of political polarization in Colombia.

For example, conversations on social media earlier this spring depended on drastically different depictions of the first day of protest in two of the country’s largest newspapers: El Espectador and El Tiempo. The El Espectador headline underscored the determination of Colombians to speak out against the tax proposals amid the COVID-19 pandemic, while El Tiempo focused almost entirely on vandalism and delegitimized the actions of thousands who marched peacefully.

The demonstrations also shed light on the use of gender and sexual violence by the police.

Temblores has recorded 25 cases of gender-based violence and six cases of sexual violence over the course of the protests. The suicide of a minor sexually abused in police custody sparked outrage and the mobilization of feminist organizations such as Articulación Feminista Popayán and Juventud Rebelde.

What role does Canada play?

Colombians living in Canada have also taken to the streets in support of the protests in their homeland. https://www.youtube.com/embed/Ko61AJ052TU?wmode=transparent&start=0

You have organized solidarity gatherings with demonstrators in various cities. They have also circulated petitions calling on Prime Minister Justin Trudeau to denounce the violence of the Colombian state against its own citizens.

While Foreign Secretary Marc Garneau issued a statement denouncing the violence, Canada, one of Colombia’s major trade and economic partners, can do much more.

In 2013, the Colombian Ministry of Defense placed a $ 65.3 million contract with a Canadian company for light armored vehicles for use by the national army. In 2017, the two countries launched a bilateral police initiative in which the Canadian police force “offers training, capacity building and strategic advice” to the Colombian national police.

Canada should end its support to the Colombian police and army and conduct a human rights review of its military exports to Colombia, as proposed by the International Peace Brigades.

This article was republished by The Conversation under a Creative Commons license. Read the original article.